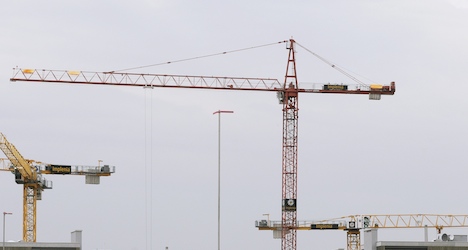 The teenager last Friday climbed to the top of the highest crane in the city on an Implenia construction site with a colleague, where the pair took selfies of themselves and the dizzying views.

The 20 Minuten newspaper reported on Monday that he has been climbing such structures since he was 13, partaking in daredevil activities shared by a group of individuals across Europe who call themselves “roofers”.

“You have to be extremely focused and careful at every step, because you can slip off,” he told the newspaper.

“If I were tired or had not been fit, I would have called off the action.”

The teen said there was no security at the construction site, where a high-rise grain silo known as Swissmill is being built, so he immediately made the dangerous climb.

A spokeswoman for Implenia said that strict security arrangements had been made for the Swissmill site.

“The site is fenced and locked to the appropriate standard,” Natasha Mathyl told 20 Minuten.

Access to the crane is secured separately and security agents patrol the site outside of working hours, Mathyl said.

Signs also state that entering the site is prohibited so anyone trespassing would be guilty of a crime, she indicated.

The teen told 20 Minuten that while the crane climb boosted his adrenaline, he had accomplished a more daring feat in December when he climbed to the top of a 187-metre crane next to the Roche Tower, Switzerland’s tallest building under construction in Basel.

He told the newspaper that the “roofer” scene is gaining more followers by the day and his Instagram site now lists 1,600 subscribers.

“I often get emails from people who want join in,” he said.