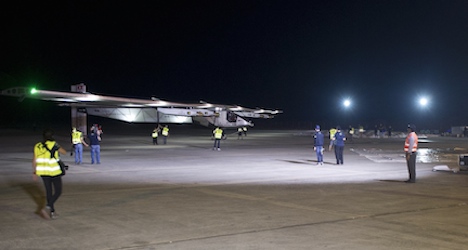 With pilot Bertrand Piccard at the controls, the revolutionary plane landed in Chongqing airport at 1.35am local time on Tuesday after a 22.5-hour flight from Myanmar, its vast wingspan lit up by rows of led lights.

The plane had been expected to make just a brief stop in the southwestern city and quickly travel on to Nanjing, about 270 kilometres (170 miles) from Shanghai, but that has been delayed due to weather and safety concerns, with the team now expecting to stay a few days waiting for better conditions for
the trip east.

"We are tired but we are still very, very happy to be in Chongqing," said mission engineer Michael Anger on the project's website.

"In China it was demanding, this flight, especially for Bertrand but also for the team preparing two flights in a row and then this afternoon cancelling the second flight due to bad weather in Nanjing."

Piccard, one of the two Swiss pilots of the solar-powered plane, battled extreme cold of down to  minus 20 degrees in the cockpit and the general unpredictabilities of flying above the mountainous Chinese provinces of Yunnan and Sichuan.

Flying at high altitude for most of the journey, Piccard had to use additional oxygen on the 1,375-kilometre route.

The flight from Mandalay to Chongqing was the most difficult, Raymond Clerc, flight director for Solar Impulse, said on a video interview on the project's website.

Chongqing was the fifth of12 planned stops on the plane's maiden journey around the world from Abu Dhabi, with a total flight time of around 25 days spread over five months.