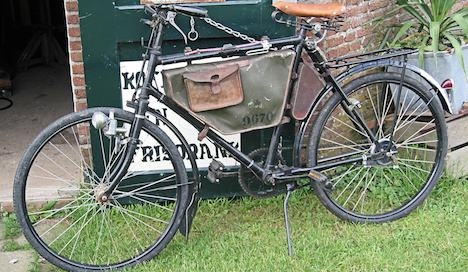 Were you fooled into believing that Switzerland was bringing back the bicycle infantry in the Swiss Army? Photo: Rasbak/Wikimedia Commons

Over at The Local Sweden, we had most of you fooled with our story about a documentary centring on an isolated Swedish town that says “no” in a surprisingly Scottish way – a legacy of the Viking invasion of Scotland many centuries ago. We even got a real live linguistics professor (complete with beard) to tell us about the history of this strange-sounding "no".

Of course, there isn’t a shred of truth in any of this.

But if you’ve been watching The Local closely this year, you probably saw our viral video about the strange sound northern Swedes make to mean “yes”. And that story was actually true.

Elsewhere in Scandinavia, The Local Norway broke the news that farmed reindeer have become “Norway’s new salmon”, to the delight of the country’s hard-pressed farmers – and no doubt the fury of animal rights activists.

And in Denmark, home to the world’s best non-native English speakers, PM Helle Thorning-Schmidt apparently announced that the Nordic country would be designating English as an official second language.

Or perhaps you were left with egg on your face after reading The Local Spain’s story about how Benidorm is clamping down on a culinary favourite of many tourists: the full English breakfast.

Over in Austria, garden gnome enthusiasts got hot under collar after reading about a proposed hike in sales tax for the ornamental dwarves.

Bearded Eurovision star Conchita Wurst even got a mention.

In a move likely to stir up Italian wrath (if only it were true), American pizza makers claimed that the US is the true homeland of pizza – and the UN chose Neapolitan pizza as its candidate for protection under Unesco’s Intangible Cultural Heritage List.

We even managed to get a quote from America pizza maker Joe Sfincione (Sfincione, by the way, is a type of pizza).

In France, we had expats choking on their morning croissants with a story about a provocative campaign by French restaurant owners to get tourists to shut up when dining out in the capital.

Our story included exclusive footage of a loud-mouthed foreign tourist being thrown out of a bar and snaps of campaign posters taken by shocked readers.

In Germany, Chancellor Angela Merkel made the extraordinary announcement that the country had taken inspiration from the British and would re-establish the monarchy.

Understandably, the current head of the House of Hohenzollern – the ‘favourite’ to become king – wasn’t too thrilled with the idea, noting that it “didn't work out too well for great-great-grandpa”.

And, finally, neighbouring Switzerland decided to resurrect its bicycle infantry for the Swiss Army. Cycling up and down Alpine passes, it was felt, would improve levels of fitness in recruits.

But there are shreds of truth in the article, including the fact that there was in fact a bicycle infantry using heavy, single-speed bikes — and yes Defence Minister Ueli Maurer served in the army as a major commanding a cycling battalion!

THE LOCAL
What The Local’s new design means for you

THE LOCAL
How The Local’s members are helping us get better
Url copied to clipboard!