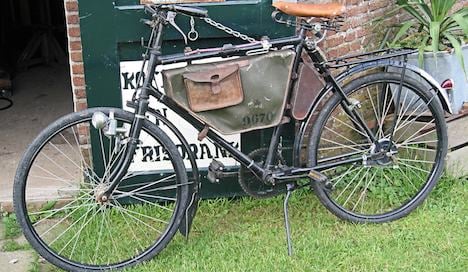 The Swiss bicycle infantry was phased out in 2001 but a defence department spokesman said late Tuesday that its resurrection would help deal with the thousands of recruits who are out of shape.

Spokesman Thomas Fisch said the army favours the return of the single-speed bicycles used continuously by the army between 1905 and the 1990s.

“Frankly, young Swiss men used to be fine specimens of manhood, but today many have let themselves go,” Fisch told The Local.

"Our view is that a Swiss soldier without rock-hard buttocks brings shame on the army."

The bikes, equipped to carry food rations and battle gear, weigh a hefty 25 kilograms or more, making them challenging to manoeuvre in mountain terrain.

As well, soldiers in the cycling infantry will be expected to carry up to 32 kilograms of equipment.

Defence Minister Ulrich Maurer is an avid cyclist who served in the army as a major commanding a bicycle battalion.

In addition to being useful for improving the fitness of soldiers, the army says bicycles will play a vital part in national defence.

"Frankly, we're getting a bit worried by the French and their crack Segway regiment," Fisch said.

"We hope that putting our men on bikes will stop them getting up to any mischief."

The infantry will enable the army to respond nimbly and without the noise of motorized vehicles, he said.

A budget for the new bicycle contingent has not been announced but thousands of the Swiss-made bikes will have to be ordered at an estimated cost of 2,500 francs apiece, including maintenance over ten years.

Maurer, concerned about the overuse of motor vehicles by the military, wants all recruits to take their turn in the bicycle infantry — around 10,000 a year.

The Swiss Army has raised the alarm about recruits being unfit for the tasks they have to take on, with more than 20 percent of them being sent home within three weeks of starting training.