"The operation was a success and paves the way for continuing the evacuations of more than 16,000 third country nationals who are stranded in Yemen," IOM said in a statement issued on Sunday.

The organization said 38 countries had asked it to help evacuate their nationals stranded amid the spiralling conflict in Yemen.

IOM said it had been working for more than a week to get flight clearance for the chartered plane and that some of the passengers had been waiting at Sanaa airport for days.

Around two dozen foreigners who had been cleared for evacuation had, meanwhile, not showed up at the airport in time for the flight, which landed in Khartoum around 3 pm (noon GMT).

"Hopefully we'll be a little more organised tomorrow (Monday), when we do our next flight," Saba Malme, IOM's operations coordinator in Yemen said in the statement.

IOM said it had been "inundated with calls from migrants, private citizens and family members of people believed to be stranded in Yemen."

It said it had identified about 16,000 persons who urgently need international travel assistance, including around 5,000 who are believed to be ready to travel immediately.

Mohammed Abdiker, head of IOM's emergency operations, said the Geneva-based organization had been negotiating with Sudan and Ethiopia to set up "a humanitarian air bridge".

"We expect after the first flights began, we would have by next week several rotations between Khartoum and Sanaa daily," he said, adding that the organization also aimed to run flights between Sanaa and Addis-Ababa.

Iran-backed Shiite Huthi rebels have seized swathes of territory in Yemen since they entered Sanaa in September 2014, forcing the government to flee.

Yemen slid deeper into turmoil after a Saudi-led air campaign began on March 26th to push back the rebels' advance after they forced President Abedrabbo Mansour Hadi to flee the country. 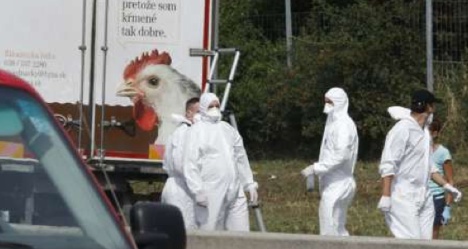 The grim new statistic followed the deaths of some 800 people on Sunday when a boat packed with migrants capsized near Libya in the deadliest Mediterranean shipping disaster for decades.

"IOM calculates the 2015 death toll now is more than 30 times last year's total at this date . . . when just 56 deaths of migrants had been reported on the Mediterranean," spokesman Joel Millman told reporters in Geneva.

"IOM now fears the 2014 total of 3,279 migrant (deaths) on the Mediterranean may be surpassed this year in a matter of weeks, and could well top 30,000 by the end of the year, based on the current death toll," he said.

UNHCR spokesman Adrian Edwards said Sunday's migrant boat tragedy was "the deadliest incident in the Mediterranean we have ever recorded."

Edwards said there had been 1,300 deaths in April alone, making it the deadliest month on record.

"The way we see it is that if there were 800 people on that fishing boat that sank . . . we can imagine that the same boat last year would have had 200 people on it," Millman said.

"If there's a real shortage of crafts they're going to do these reckless things," he said.

"If that's the case, and it appears to be, there is no reason not to be afraid that death rates could soar astronomically, because they are taking these measures to move people."

Volker Turk, the director of international protection at the UN refugee agency, said most of the migrants taking the perilous journey were refugees.

"If you look at the numbers last year, over 50 percent of the people who crossed the Mediterranean were people in need of international protection — mostly Syrians, Eritreans, some Somalis," he said.

Italy, one of the frontline European states for illegal immigration, suspended its Mare Nostrum search-and-rescue operation late last year in protest over its rising cost.

That was replaced by a smaller and much more restricted EU-led mission called Triton.

"With the end of Mare Nostrum, we indeed unfortunately predicted the types of scenarios that are playing out today, and we hope that the European council meeting on Thursday will give adequate attention to the search and rescue dimension of this issue," Turk said.