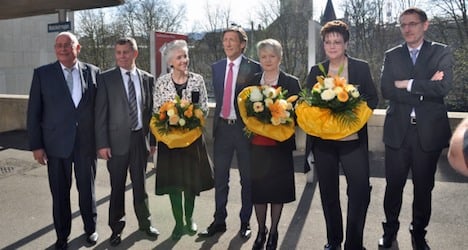 The Green’s leading politician Martin Graf, sitting justice minister, was booted out of office after just one term, arriving eighth in the race for the seven-seat government.

With the election of Silvia Steiner, the Christian Democrats regained a seat on the government lost in the previous election, while the centre-right Liberals, right-wing Swiss People’s Party (SVP) and Socialist Party each have two members in the cabinet.

Graf was seen to have suffered from the public response to a costly therapy programme for a violent teenaged offender known as Carlos, which allowed him to live in a four-room apartment and receive therapy which include Thai boxing lessons.

According to media reports, the canton spent close to a million francs to pay for a team of ten counsellors that included a social worker and lawyer before the therapy was scrapped, while Carlos was rearrested last October for threatening behaviour.

The Greens were also punished in the parliamentary elections, in which they lost six seats, leaving them with 13 MPs, while the Liberal Greens, with 14 seats, lost five seats, according to results issued by the canton.

The SVP remained the strongest political force in the 180-seat Zurich parliament with 54 seats, followed by the Socialists (36), and the resurgent Liberals (31) and the Christian Democrats (nine).

The SVP and the Liberals do not have enough seats for a majority and will depend on backing from the Christian Democrats for parliamentary control.