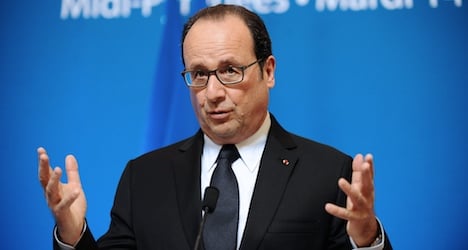 Hollande’s arrival in the Swiss capital will mark the first time a French president has made an official trip to the Alpine country since 1998, when Jacques Chirac visited.

Prior to that, François Mitterrand paid a state visit in 1983.

In advance of Hollande’s visit, the Swiss government is playing up the close relations between Switzerland and France.

It points out that there are more Swiss citizens (roughly 200,000) in France than in any other foreign country, and more French citizens live in Switzerland (around 170,000) than any other country.

Bern adds that Switzerland is France’s fourth largest trading partner after Germany, the US and Italy, while 150,000 French residents commute to work in Switzerland.

The countries “continue to enjoy an excellent relationship”, although the role of Swiss banks in tax evasion by French citizens has lately cast a cloud over otherwise friendly ties.

The decision by Swiss voters to back restrictions on immigration by citizens of the European Union is another bone of contention, threatening bilateral relations between Switzerland and the EU.

Hollande will be received in Bern with full military honours and in the presence of the seven-person federal government, according to the agenda released by the federal department of foreign affairs.

Other French government representatives will attend the meeting.

A gala dinner is planned on Wednesday night, when Hollande will visit the Zentrum Paul Klee, the Bern museum dedicated to artist Paul Klee.

On Thursday, Hollande and Sommaruga will tour educational institutions and businesses in the Zurich region and Lausanne.

Stops include a visit to Ernst Schweizer in Hedingen (in the canton of Zurich), a company that bills itself as a champion of “clean tech”.

The solar energy firm, employing 611 people, relies on French businesses to supply it with parts and also engages apprentices.

The Elysée Palace indicated that Hollande is interested in learning about the Swiss apprenticeship system and how it compares with that in France.

From Zurich the French president will board a special train to travel to the Federal Institute of Technology at Lausanne (EPFL) where he is to exchange views with professors and students at the Rolex Learning Centre.

Later, he is to meet Thomas Bach, the president of the Lausanne-based International Olympic Committee at the IOC’s offices, where he is expected to promote Paris’s candidacy — announced just on Monday — for the 2024 Olympic Games.

In the run-up to Hollande’s visit, the foreign affairs department issued an update on negotiations with Paris on the operation of the Basel-Muhlouse International Airport, the only bi-national airport in the world.

The department said the countries have confirmed progress on an accord to deal with tax issues and sharing of costs for the airport that employs a total of 6,000 people, including 4,500 in the Swiss sector.

Among the areas of agreement is permitting Swiss value-added tax to be levied in the Swiss customs area of the airport.

A final deal is expected to be reached by the end of the year.