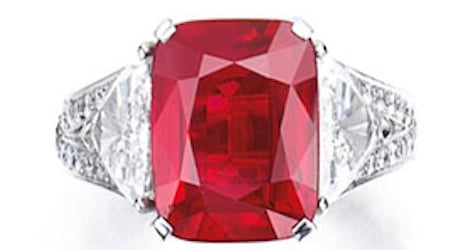 The Historic Pink Diamond, believed to have once belonged to Napoleon's niece, and the deep red Sunrise Ruby figure among a wide range of pieces for sale at Sotheby's spring Magnificent Jewels and Nobel Jewels auction in the Swiss city on May 12th.

The fancy vivid pink diamond, weighing 8.72 carats, is "extremely rare", the auction house said on Thursday, pointing to its classic non-modified cushion cut, which is highly sought after but unusual in pink diamonds.

The stone, which is mounted on a ring and sparkles with "clarity and mesmerizing colour", is believed to have been part of the collection of Princess Mathilde, niece of French Emperor Napoleon I, according to the Gemological Institute of America (GIA).

As for the 25.59-carat Sunrise Ruby, part of a collection of Cartier jewels available at the auction, GIA described it as "a unique treasure of nature".

"In over 40 years, I cannot recall ever having seen another Burmese ruby of this exceptional size possessing such outstanding colour," David Bennett, head of Sotheby's international jewellery division, said in a statement.

The "extremely rare" ruby "is breathtaking in its extraordinary size and outstanding depth of colour," Sotheby's said, describing the shade as "pigeon's blood red, the rarest and most sought after of hues."

The auction house is asking for $12-18 million for the gem.

The Cartier collection also features a diamond necklace, set with diamonds totalling more than 190 carats, with an asking price of up to $10 million.

Rival auction house Christie's will be hosting its spring jewels auction in Geneva on May 13th.

It announced earlier this week that among the 351 pieces to go under the hammer is the Maria Christina Royal Devant corsage diamond brooch, a wedding gift from Spanish king Alfonso XII to his wife, Austrian archduchess Maria Christina in 1879.

Christie's hopes to pull in up to $2 million for the brooch.