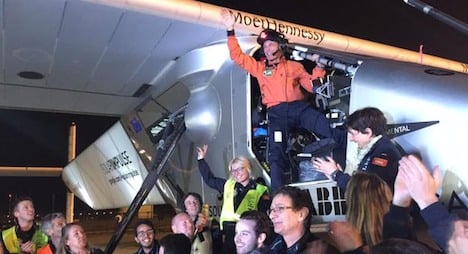 With pilot Bertrand Piccard at the controls, the pioneering single-seater aircraft touched down at 11:31pm local time, after a 17-hour trip from the southwestern megacity of Chongqing some 1,190 kilometres away.

Its arrival came after repeated meteorological delays and its other Swiss co-pilot, André Borschberg, returned to Europe to be treated for migraines.

Borschberg is expected to return to China by Friday, a Solar Impulse 2 spokesperson told AFP Tuesday.

"He should have flown this leg."

Borschberg tweeted back with a photo of Piccard in the cockpit and a message that the pilot — clad in an orange flight suit, blue air mask and dark sunglasses — was "looking great after more than ten hours of flight".

Piccard also posted to social media one of the more unusual selfies, taken from the cockpit of the solar aircraft:


Nanjing, located near Shanghai along the lower reaches of the Yangtze, is the final stop for the aircraft before it departs on the most ambitious leg of its journey: a solo non-stop flight for five days and nights across the Pacific to Hawaii, a distance of 8,500 kilometres.

The team hopes to promote green energy with its round-the-world attempt.

Solar Impulse 2 arrived at Chongqing airport from Myanmar on March 31st and had been due to make only a brief stop in Chongqing, but was held up for weeks by weather and safety concerns.

The plane's maiden global circumnavigation began in Abu Dhabi last month and is scheduled to take in 12 stops, with a total flight time of around 25 days spread over five months.