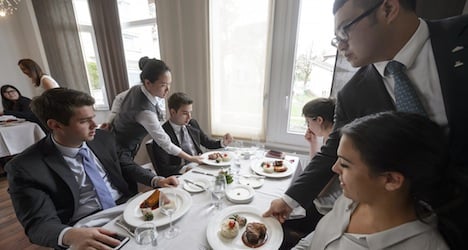 But all the servers, the impeccably dressed guests and even the kitchen staff sending out elaborately decorated plates are in fact students at one of Switzerland's famous hotel management schools.

"This is part of the student's learning experience," said Stéphane Bernard, a service instructor at the Glion school, overlooking the picturesque town of Montreux on the shores of Lake Geneva.

The school is ranked among the top three such establishments in the world, all in Switzerland.

For more than a century, hotel management schools in the wealthy Alpine nation have been considered the best and draw students from around the globe.

Glion alone has some 100 nationalities attending, with French the biggest group followed by Chinese, Russian and Swiss.

But these schools are facing a range of new challenges, with competing, less expensive establishments surfacing in Asia, the Middle East and elsewhere, in step with shifting global travel patterns.

The soaring value of the Swiss franc, meanwhile, has made already sky-high tuition at the Swiss schools around 20 percent pricier for students writing their cheques in euros.

The Swiss schools acknowledge that worried parents have enquired about price cuts, but insist that is not the way to go.

EHL, the world's first hotel management school, which opened in 1893 and still tops global rankings, charges around 150,000 francs ($157,000/€146,000) for its three-year bachelor programme for international students.

Far from cutting the price, Rochat said he plans to raise it in September to reflect the school's annual revamp of 15 percent of its curriculum to keep up with an ever-changing global hospitality market.

And despite growing competition from new schools in Asia especially, he says Switzerland's reputation for innovation and excellence, its stunning nature and stable economy provide an atmosphere that cannot be emulated.

"In Switzerland, the standards are at the top," she said, explaining why she had chosen to travel from Thailand for the programme.

The 19-year-old graciously tops up a glass of sparkling water and suggests a good wine to go with the chicken ordered by a classmate.

She and the others work hard to carry out their tasks professionally, but they do not plan to be waiters or kitchen staff: they are being groomed as future industry leaders.

"The important thing is that they try everything, that they learn the needs of each profession and each service in the hotel so they can manage teams of specialists," explained Alain Brunier, president of the Swiss Association of Hotel Schools and also head of the Geneva hotel school EHG.

Lee says she aims to manage hotels for a large chain so she can travel the world.

Her Glion classmate, Federico Pironti, a 20-year-old Italian-Austrian student, says he has set his sights higher.

"My big dream is to own hotels, not manage them," he said, smiling underneath his chef's hat as he prepares desserts in the kitchen. "To own a hotel chain, it's an expensive dream, I know,"

Glion, a fully private institution, charges its international students around 185,000 francs for its three-and-a-half-year bachelor programme, including room, board and insurance.

But the students view the sky-high tuition as an investment that will pay off.

While an increasing number of students in other fields are graduating into unemployment and uncertainty, students targeting the still booming global tourism industry have a wealth of options, Brunier said.

A graduate may not immediately land a job managing a five-star Geneva hotel, "but if they are willing to travel to say Shanghai or Dubai they can easily find not just work but a position of responsibility," he said.

Glion director of campuses Peter Cross says 85 percent of graduates "have between two and three job offers at graduation," while the others are either entering a family business or not looking for work for other reasons.

"There is a strong guarantee of getting a job at the end of the programme," he said.

Lucile Falguières, who graduated from Glion in 2005 and is currently associate sales and marketing director at the five-star Fairmont Montreux Palace hotel, said she was hired right out of school to manage a team of 30 people at a luxury hotel in Dubai.

And she says she has since hired her share of graduates from Glion and other Swiss schools.

"As soon as you see a Swiss school, you tend to hire the person," she said. 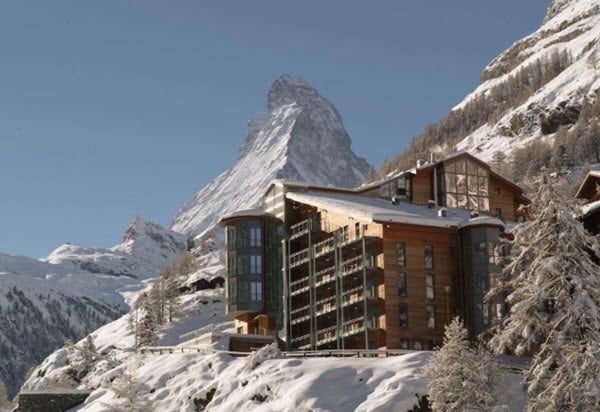 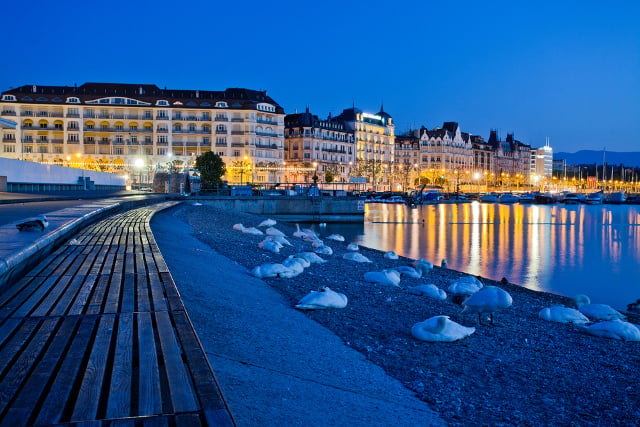