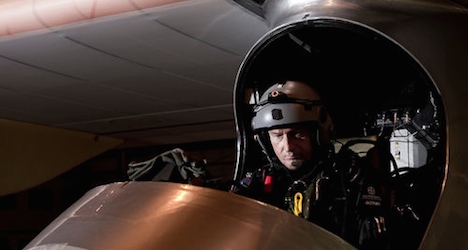 On its landmark attempt to circumnavigate the globe, the Solar Impulse 2 landed in China's eastern city of Nanjing late Tuesday after a 17-hour trip from the southwestern mega-city of Chongqing.

The plane is attempting to circle the world powered only by the sun with the next and longest leg taking it from China to the US state of Hawaii.

Organizers expect that 8,500 kilometre journey to take five to six days non-stop with only a single pilot.

Success will mean the longest flight ever in a solar-powered plane.

"Can we make the pilot sustainable as well?" André Borschberg said by video link from Switzerland, where he is receiving treatment for health problems.

"This will be the human challenge when we tackle the next leg," he told an audience of reporters.

The other of the two pilots, Bertrand Piccard, guided the plane to Nanjing, located near Shanghai along the lower reaches of the Yangtze River, to finish the sixth stage of the historic 12-leg quest

"Finally we made it and the plane is here," Piccard told the news conference in a hangar at the Nanjing airport with the plane parked nearby.

"André (Borschberg) will be ready in a couple of weeks to jump in the cockpit and cross the Pacific to Hawaii," he said.

Solar Impulse 2 arrived at Chongqing airport from Myanmar on March 31 and had been due to make only a brief stop, but was held up for three weeks by weather and safety concerns.

Arrival in Nanjing meant "positioning the airplane now close to the Pacific Ocean and then afterwards for us to try to do this crossing, which is going to be the next big challenge for the entire project," Borschberg said.

"I hope that in a few days I will be able to come to China again and be ready for the next part," he said.

He described his recent health issue as "shingles" which causes a painful rash. He was also treated for migraines.

The plane's maiden global circumnavigation began in Abu Dhabi last month and is scheduled to take in 12 stops, with a total flight time of around 25 days spread over five months.

Solar Impulse 2 is powered by more than 17,000 solar cells built into wings that, at 72 metres, are longer than those of a Boeing 747 and approach those of an Airbus A380 superjumbo.