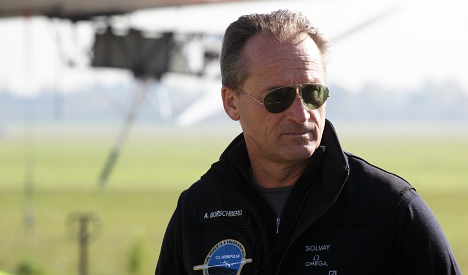 Switzerland's Solar Impulse 2 and pilot André Borschberg are waiting in the eastern Chinese city of Nanjing for weather conditions to allow the most challenging leg of a landmark attempt to circumnavigate the globe in a plane powered by the sun.

"We have a lot of measures to mitigate the risk," Borschberg told reporters.

"It's an adventure, but I see this as an inner voyage," he said.

"It's a great opportunity to discover myself."

The 8,500 kilometre flight from China to the US state of Hawaii is expected to take five to six days non-stop, with only a single pilot.

If it succeeds it will be he longest ever flight in a solar-powered plane.

Organizers originally said the aircraft could take off Tuesday, but a spokeswoman said the earliest possible departure was now Saturday.

The 62-year-old Borschberg, who trained as a fighter pilot in the Swiss air force, will face extreme temperatures in the unpressurized and unheated 3.8-cubic-metre cockpit.

"This will be the moment of truth, I mean the big question mark: Are we going to make it?" he told a news conference.

The pilot's seat has an integrated parachute and life raft in case of emergencies.

Educated as a mechanical engineer and later becoming an entrepreneur, Borschberg said he will use yoga to deal with the stress to his body during the flight.

Solar Impulse 2 landed in Nanjing two weeks ago after a 17-hour trip from the Chinese megacity of Chongqing, guided by its other pilot, Bertrand Piccard.

"I believe now, we are ready (for the next leg)," Piccard told reporters by video link.

"We just need to wait for the good weather to go for it."

Piccard said he will fly the plane from Hawaii to the US city of Phoenix.

The plane's global flight began in Abu Dhabi last month and is scheduled to take in 12 stops.

Solar Impulse 2 is powered by more than 17,000 solar cells built into wings that, at 72 metres, are longer than those of a Boeing 747 and approach those of an Airbus A380 superjumbo.