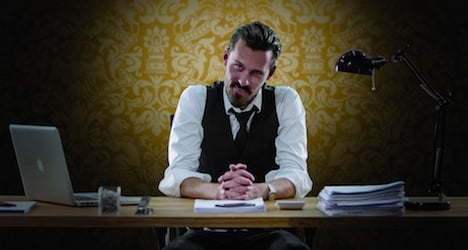 The force on Tuesday launched a publicity campaign featuring a video that graphically shows what can happen to a young person strolling along a city street, distracted by listening to music or mobile phone calls with headphones.

The 60-second film noir — which you can check for yourself below — is designed to go viral in a bid to reach young people in particular about the risks of tuning out of your surroundings in busy urban surroundings.

In Switzerland, 1,100 people were seriously injured due to lack of attention in 2013, according to a news release from Lausanne police.

And distraction is one of the principal causes of traffic accidents, police said.

According to a survey conducted by the Swiss Accident Prevention Bureau (BPA) in 2012, two-thirds of pedestrians admitted telephoning or listening to music while walking around, behaviour particularly prevalent among people aged 15 to 29.

With the backing of the BPA and Touring Club Suisse, the video has been posted in French, German and English on social media sites, with support from other partners including the Lausanne university hospital (CHUV).

The goal is to leave a deep impression in viewers’ minds of the strong images shown in the video so that they will pay more attention to the dangers around them when they are walking in urban areas.

The campaign will be backed with posters in Lausanne’s metro from May 11th to 24th and is to involve local personalities and a competition with five iPad minis as prizes.

Check out the English version of the video: