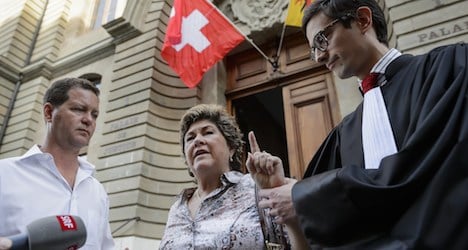 Sperisen, 44, holds Swiss and Guatemalan citizenship and was sentenced last year after a three-week trial for the deaths of seven prisoners.

The sentence was then widened to include three other jail deaths.

Having left his homeland for Geneva, Sperisen could not be extradited to stand trial for killing prisoners in the mid-2000s.

But Swiss citizens can be tried at home for crimes committed abroad.

The case was launched after a lawsuit filed by the mother of one of Sperisen's victims, and the trial opened on May 15th last year.

He shot dead one of the Pavon prisoners himself.

Sperisen, who is nicknamed “The Viking” due to his hefty build and ginger beard, was appointed police chief in 2004.

He left Guatemala in 2007 amid a scandal that saw him and the country's interior minister Carlos Vielmann resign that March.

His father is Guatemala's ambassador to the World Trade Organization, which is based in Geneva, and Sperisen was arrested in the Swiss city in August 2012.

He has been in jail since then, with Geneva justice authorities arguing that there was too great a risk that he would flee Switzerland if he was released on bail.