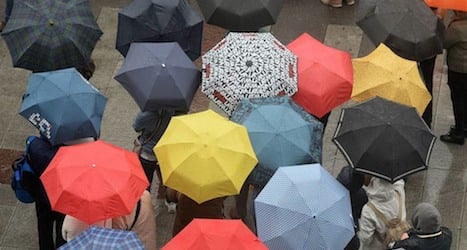 The predicted high for Sion, the capital of the canton of Valais, is 13C, compared with 27C on Thursday, the national weather office MeteoSwiss said.

With the exception of Ticino, where a high of 17C is expected, temperatures will elsewhere not rise above 12C, with maximum readings of just 7C forecast in the canton of Jura.

This follows heavy rain in Valais on Wednesday when hail damaged apricot orchards in the Chablais region, according to local residents, the ATS news agency said.

Hail also struck regions in the north, east and centre of the country, with accumulations reaching two to three centimetres in central Switzerland, MeteoSwiss said.

The cantons of Thurgau and Schaffhausen were battered by heavy rain on Wedneday night.

Earlier in the week, much of Switzerland was experiencing sunshine and summer-like temperatures, following a rainy spell that caused flooding around lakes and rivers in Western Switzerland.

The seesawing temperatures are not unexpected at this time of year, meteorologist Urs Graf told ATS.

“In the spring, the differences in the temperatures of air masses are often very great.”

MeteoSwiss anticipates a drying trend across most of the country on Saturday with temperatures rising through the weekend and a return to sunshine virtually everywhere in Switzerland on Monday.