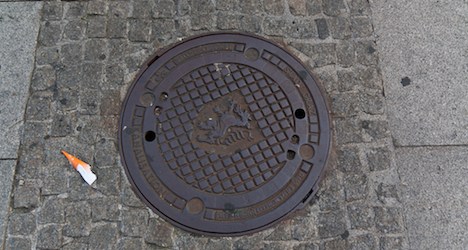 A local resident discovered the victim at the bottom of an open sewer shaft in the municipality of Münchwilen, around 35 kilometres east of Basel, on Monday afternoon, cantonal police said in a news release.

After seeing that the worker was obviously hurt and unresponsive, the resident contacted police.

Emergency medical staff confirmed the man, a Swiss citizen working for an engineering company, was dead and fire fighters retrieved him from the manhole.

Police said it quickly became apparent that the man was not the victim of a work accident but of a collision with a motor vehicle.

Officers found a car, parked nearby, with evidence of having been in a crash.

The owner of the car, a 69-year-old woman, is suspected of having run over the manhole worker.

The prosecutor’s office has opened a criminal investigation.

It’s not clear exactly what the man was doing in the manhole, but for unknown reasons he likely descended into the shaft, police said.

While going in or coming out of the manhole, police said, he may have come into collision with the oncoming car.

The investigation is aiming to clarify the exact circumstances of the man’s death.