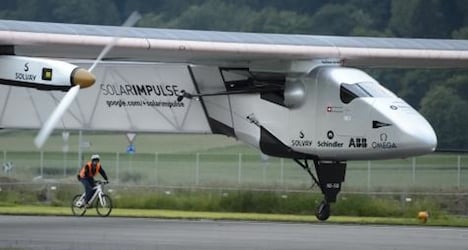 The single-seater aircraft was due to leave Nanjing, in eastern China, for the 8,500 kilometre flight over the Pacific Ocean to the US
island of Hawaii in the early hours of the morning.

But the much-anticipated seventh and longest section of the maiden solar-powered global circumnavigation was delayed once again due to concerns about the weather.

“The flight that we've been looking forward to tonight is not going to happen,” Solar Impulse spokesman Connor Lennon said in a video post on the group's YouTube channel.

Mission director Raymond Clerc said cloud cover over Nanjing and the Sea of Japan made take-off difficult and the journey would have taken an unacceptably long seven days and seven nights, two more than originally planned.

“We have big problems that added (together) make the risk too high,” he said in the video.

Meteorologists are studying weather conditions and should know in “a few hours” whether the aircraft will be able to launch in the next couple of days, he added.

Solar Impulse 2 has already spent nearly two months in China after arriving at Chongqing airport from Myanmar on March 31, where it was also held up for weeks by weather issues.

Its journey began in Abu Dhabi in March and is scheduled to take 12 legs, with a total flight time of around 25 days.