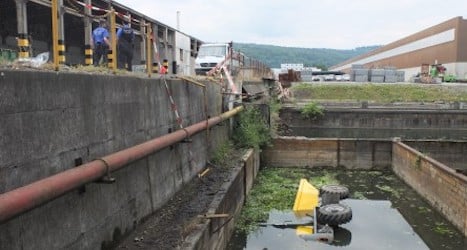 The incident occurred after 10.30am on an industrial site where passersby noticed the small truck on its side in the water-filled basin, Aargau cantonal police said in a statement.

The driver, a Swiss man, was lying lifeless in the semi-submerged vehicle, the statement said.

An ambulance crew and local police tried to resuscitate the victim without success.

Members of the fire brigade arrived along with a Rega emergency rescue team with a helicopter but the man had by that time been declared dead.

According to the initial investigation, the operator of the dump truck lost control of the vehicle, which crashed through a barrier and descended into the basin, police said.

But the cause of the accident was unclear and police have launched an investigation into the incident, along with the local prosecutor’s office.