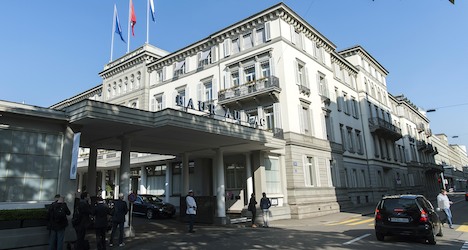 The New York Times reported that Fifa officials were arrested by Zurich police at the upscale Baur au Lac hotel.

“The bribery suspects — representatives of sports media and sports promotion firms — are alleged to have been involved in schemes to make payments to the soccer functionaries —  delegates of Fifa . . . and other functionaries of Fifa sub-organizations — totalling more than $100 million,” the Swiss justice department said in a statement.

“In return, it is believed that they received media, marketing, and sponsorship rights in connection with soccer tournaments in Latin America,” it added.

The justice department said the six officials were arrested upon the request of US authorities “on suspicion of the acceptance of bribes and kick-backs between the early 1990s and the present day,” and that they were being held pending extradition.

“According to the US request, these crimes were agreed and prepared in the US, and payments were carried out via US banks,” the statement said.

Law enforcement officials said much of the inquiry involves Concacaf, one of the six regional confederations that compose Fifa, the New York Times reported.

Warner, longtime head of Trinidad & Tobago’s football federation, headed Concacaf from 1990 to 2011, while Webb is the current president.

Fifa issued a statement saying it would hold a press conference at 11am in Zurich to follow up the arrest of the senior football officials.

It said the press conference by communications head Walter DeGregorio would also be streamed live on its website.

A Fifa spokeswoman earlier said that international football's top body was seeking to clarify the situation, and would not comment on the arrests.

“We have seen the media reports,” she told AFP.

“We are seeking to clarify the situation. We will not comment at this stage.”

The charges are a major challenge for Fifa that comes as its head Sepp Blatter looks to secure a fifth term in a Friday vote.

The Swiss met with Concacaf representatives on Tuesday.

But Blatter, a powerful figure in sports, is not a target of the US case, The New York Times reported.

In May, Blatter denied he was a target of an FBI corruption investigation.

The denial came after an ESPN television documentary said the Swiss official stayed away from the US over a Fifa investigation.

Blatter, who has led Fifa since 1998, has continually had to steer the multi-billion dollar world body through corruption storms.

The latest has been over the award of the 2018 and 2022 World Cups to Russia and Qatar.

Qatar has strongly denied any wrongdoing linked to its bid.

But a former Fifa vice president from the Gulf state was banned for life from FIFA because of corruption.

He left Fifa because it refused to fully publish his report.

He called Wednesday's arrests a “sad day” for football.

He and European federation chiefs say a change of leadership is now urgently needed to save Fifa's tainted image.

Swiss law enforcement getting room numbers for FIFA execs they are heading upstairs to arrest pic.twitter.com/F69djqpcu5