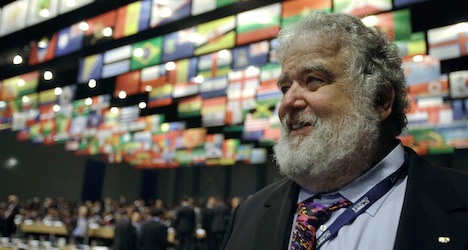 The disgraced Blazer, a once imposing figure whose aging 70-year-old body is now reportedly ravaged by colon cancer, faces years in prison after he pleaded guilty in November 2013 to a litany of charges.

He faces a maximum prison term of ten years for the FBAR charge and five years for the tax evasion charges, according to the US Justice Department.

The generously bearded Blazer forfeited over $1.9 million at the time of his plea and must fork out a second amount when he is sentenced.

It caps a stunning fall from grace for Blazer, who as the most powerful man in US soccer and as a Fifa executive committee member rubbed shoulders with the biggest names in football — and also world politics — and enjoyed the luxurious trappings afforded to the game's power brokers.

A larger-than-life character, the pugnacious Blazer divided opinion in the United States and in the corridors of power at Fifa's Zurich headquarters.

See also: WHO'S WHO IN FIFA CORRUPTION PROBE

On the one hand, despite never playing the game, some credited him with building up “soccer” in the United States and using his connections and close personal ties with Fifa bigwigs to advance the interests of football in America on the foreign stage.


But when the large-framed Blazer was suspended in disgrace in 2013, the beginning of his rapid downfall, he had forged a reputation as a man who abused his lofty position to enjoy the high life of private jets, five-star hotels and lavish holidays.

He soon earned the unsavoury moniker “Mr Ten Percent,” a nod to the increasing number of claims of multimillion-dollar kickbacks that he allegedly insisted on.

Blazer raked in more than $21 million from football, much of it paid to offshore shell companies, the BuzzFeed News website reported last year.

He used part of his eye-watering fortune to snap up high-end properties around the world — including, reportedly, an upscale apartment for his cats.

It was Blazer — with his nose for business and exuding charm —  who was credited with making FIFA into the money-making machine that it is today.

So the irony that he was said to have been central to Wednesday's arrests of his former comrades in Zurich will not be lost on those who closely watch football politics and the swirling intrigue that is threatening to swallow up the world's most popular sport.

According to the New York Daily News, Blazer — at the behest of the FBI and US tax authorities — used a keychain that contained a tiny microphone to record “a parade of international figures,” allegedly a component leading to the arrests.

“Blazer's cooperation provided American criminal investigators in the Eastern District of New York a rare window into the shadowy financing of international soccer, a world notorious for its corruption and lavish excess,” the newspaper said last year.

It alleged that, despite his generous earnings, Blazer failed to pay income taxes for more than a decade and investigators used that to threaten him with prosecution and convert him into a cooperating witness from 2011.