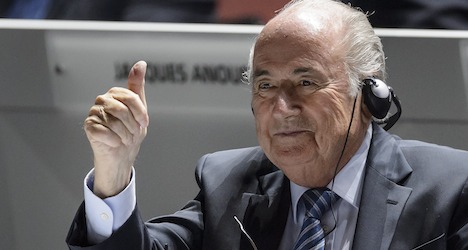 Blatter gives thumbs up during congress on Friday. Photo: AFP

The arrest of seven top Fifa officials this week at a luxury Zurich hotel on charges of racketeering involving millions of dollars of bribes and corruption charges has cast a cloud over the meeting.

“The events on Wednesday unleashed a storm and it was even questioned whether this congress would take place or the agenda may be changed,” Blatter said.

“Today I am appealing to unity and a team spirit so we can move forward together,” the 79-year-old Swiss said.

“It may not always be easy but it is this reason that we are here today.”

Delegates were attending the congress to solve such problems, Blatter said.

“This may not happen in one day but we are starting and we will do it with the members of the national associations because you are the ambassadors of our football,” he said.   “You have the power to change the face of Fifa,” Blatter said.

“You have the power in your hearts, a power you can not buy on the markets.”

He talked about solving problems and not just talking about them.

“It is the fight against corruption, match fixing, and racism – which we still have in our game and it hurts,” Blatter said.   “We will naturally talk about development but that all belongs together. We have a chance to create unity.”

Blatter has faced unprecedented opposition from major figures in football, including Michel Platini, head of Uefa, who called on the Swiss to step down.

In a later speech, Blatter acknowledged that Fifa was going through troubling times but said, with reference to people who claim that he should be held responsible for the corruption scandal, “we cannot supervise everybody in football”.

He said the Fifa officials charged and arrested “are truly at fault, especially if they are found guilty”.

Blatter added that “we can’t let the reputation of football be dragged through the mud like that”.

But he emphasized that the individuals involved do not represent the whole organization.

They are people “who have forgotten that Fifa is based on respect, discipline and a team sport with the same goal”.

Blatter also questioned the timing of the arrests, saying “I’m not going to use the word coincidence but I do have a question mark”.

Blatter is facing a challenge from Jordan’s Prince Ali bin Hussein, the only candidate opposing the native of the canton of Valais.

Prince Ali, 39, who has support from some European football federations, is calling for changes to restore confidence to Fifa, saying “we cannot continue the crisis”.

But barring an upset, Blatter is expected to secure enough support from African, Latin American and Asian football federations to keep his job.

The vote for Fifa’s president for a four-year term is scheduled at the end of the meeting on Friday in Zurich’s Hallenstadion.

The election will take place through a secret paper ballot of Fifia’s 209 member organizations.

The candidate who secures more that two-thirds of the vote in the first round will win.

If the voting goes to a second round, a simple majority will decide the outcome.