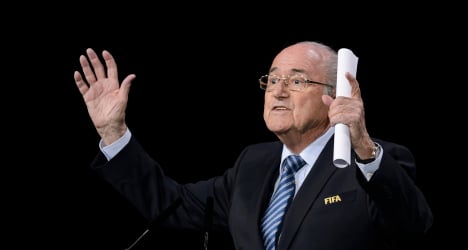 His challenger Prince Ali bin al Hussein withdrew from the race after preventing Blatter from getting the required majority in the first round of voting.

Blatter, who had defied calls to resign, raised his arms in triumph and promised the congress to be the “commander” who “guides this boat Fifa” out of the corruption turmoil it has sunk into.

The 79-year-old Blatter indicated he would not stand again saying he would handover a “strong” Fifa to “my successor” in four years.

Blatter fell seven votes short of the two thirds majority to win in the first round.

The brother of Jordan's king still forced the vote into a second round, highlighting divisions within the scandal-tainted body that Blatter will struggle to overcome.

The prince thanked those “brave enough” to vote for him before announcing he was pulling out. Blatter congratulated the prince on his performance.

The end of the campaign was overshadowed by the arrest on Wednesday of seven Fifa officials, including two vice presidents, accused by US authorities of taking tens of millions of dollars in bribes.

Swiss police are also investigating the award of the 2018 and 2022 World Cups to Russia and Qatar which have also been surrounded by corruption allegations.

In a final plea for votes, Blatter vowed to lead FIFA out of the corruption controversy if reelected.

“I am held responsible for the storm. OK yes I accept this responsibility,” he told the congress.

“I promise a strong FIFA, I want to climb back up the hill, arrange Fifa's situation. I want a beautiful, robust Fifa, out of the storm,” he said.

Prince Ali who has toured the world promising reform, “transparency”  and to “restore respect” if he wins.

“We have heard in recent days, voices which described our Fifa as an avaricious body which feeds on the game that the world loves,” he said in his address.

“We have heard questions raised about whether our family is morally bankrupt.”

Most of Europe's 53 votes went to Prince Ali, along with the United States and Australia. But Blatter's rockbed support in Africa and Asia saw him through to a new term.

Blatter spent the final days and hours seeking to reassure his supporters that he was still capable of running the organization after the shock dawn arrests at FIFA's Zurich hotel on Wednesday and the parallel raid on FIFA headquarters by Swiss police.

Blatter questioned the timing of the arrests so close to the election, declaring: “People say it was a coincidence. But I have a small question mark.”

Blatter said the arrest of the seven had unleashed a “storm” and that the congress has “vital decisions” to take. But he added: “Today I appeal for a team spirit, unity, so we can advance together. It may not be easy but that is why we are here today.”

Blatter repeated his case that he cannot “monitor” football affairs alone and cannot be blamed for the scandals.

“The guilty ones are individuals, not the whole organization,” he insisted, calling for greater action by regional confederations and national associations.

Blatter scored one victory when the Palestinian Football Association withdrew a motion to expel Israel from FIFA because of restrictions on Palestinian teams.

But he was made to wait to savour his victory.

On Thursday, he rejected an appeal by Uefa's president Michel Platini to resign because of the scandals that the European football leader said has critically tarnished FIFA's image.

While Russia's President Vladimir Putin condemned the US action in asking for the extradition of the seven officials, British Prime Minister David Cameron backed calls for Blatter to resign.

German Foreign Minister Frank-Walter Steinmeier said that if world football cannot clear up “poisonous” corruption, government agencies would be forced to step in.

Commercial fallout grew with South Korea's Hyundai Motor, a major sponsor of Fifa, saying it was “extremely concerned” about the new scandals.

Credit card giant Visa has threatened to “reassess” its sponsorship if Fifa does not clean up its act.

Coca-Cola, Adidas, McDonald's and Budweiser have also spoken out. The United Nations says it is reviewing its cooperation accords with Fifa.

Six have indicated they will fight extradition to the United States, Swiss authorities said.

The corruption storm is unlikely to ease with Blatter's reelection.