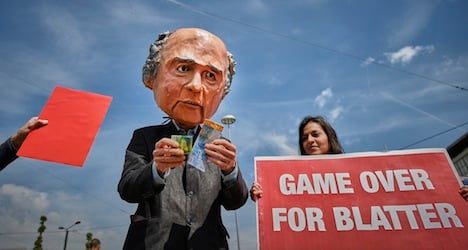 Delegates and journalists were allowed back into the hall after police officers cleared the premises for a search.

Tages-Anzeiger reported that police had received the threat by telephone on Friday morning.

Zurich police confirmed they were responding to a bomb alert at the venue where Fifa is hosting its widely-watched annual congress, amid a massive corruption scandal rocking world football's governing body.

Fifa official Jérôme Valcke said when the delegates returned to the meeting hall that they had received an anonymous threat and that the police had searched the premises during the meeting lunch break before saying all was clear.

“Fifa and the authorities immediately evaluated the situation,” Valcke said.

“The premises have been cleared now by the authorities,” he said.

“The congress can start again.”

“So you have again my smile,” Fifa president Sepp Blatter said.

The bomb alert happened during the Fifa congress where officials were set to vote on the election of the football group's president, among other issues.

Security agents at the gathering also evacuated a demonstrator holding a red card who asked delegates to expel Israel from Fifa.

Palestine, which has been a Fifa member since 1998, wants the football governing body to expel Israel over its restrictions on the movement of Palestinian players.

Fifa president Blatter is seeking re-election amid a scandal after seven top Fifa officials were arrested this week on charges of racketeering involving millions of dollars of bribes and corruption charges.