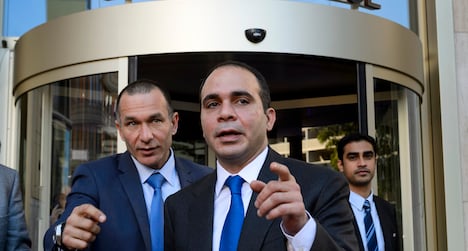 The son of the late King Hussein of Jordan only turns 40 in December, but he is the only candidate opposing Blatter in the presidential election at Fifa's 65th congress in Zurich.

Several of Fifa's 209 member associations have said they will vote for the prince, who is expected to get plenty of European support.

But it may not be enough to wrestle power from the 79-year-old Blatter, who can rely on strong support from African, Latin American and Asian federations.

Prince Ali has been vice president of Fifa in Asia since 2011 and says Blatter must be denied a fifth term in charge.

“We cannot continue with the crisis in Fifa,” said the prince in a statement after seven top officials were arrested as part of a US investigation into corruption within Fifa on Wednesday.

“Leadership that accepts responsibility for its actions and does not pass blame. Leadership that restores confidence in the hundreds of millions of football fans around the world.”

With Fifa facing one of the biggest crises of its 111-year history, the US and British-educated army officer is seen as a potential breath of fresh air in Fifa's corridors of power.

No stranger to the trappings of power and wealth, the father of two has already proved he can bring about change.

He led the campaign which saw Fifa lift the ban on the hijab and other religious head coverings being worn during matches last year.

Last September, the Fifa executive committee member led calls for Michael Garcia's report into Fifa's awarding of the 2018 and 2022 World Cup finals to Russia and Qatar respectively to be made public.

“The entire football family as well as its sponsors and those who follow the game worldwide have a full right to know the contents of the report in the spirit of complete openness,” he said at the time.

After graduating from Salisbury School in Connecticut, USA in 1993 where he excelled at sports including wrestling, the prince joined Britain's prestigious Royal Military Academy at Sandhurst.

He was awarded the Brunei Medal for Excellence and was commissioned as an officer in December 1994 while still a teenager.

The prince has won several foreign decorations, including a British knighthood, the French Legion d'honneur and Japan's Order of the Rising Sun.

He still holds the rank of general in the Jordanian Armed Forces and became president of the Jordan Football Association in 1999.

But should he succeed, he has no plans to stay more than one term and simply wants to “shift the focus away from administrative controversy and back to sport”.

“I want to get in there, make the changes that need to be made and then get out of the way,” he told the New York Times.

Fifa.com was providing live video coverage of the Fifa 65th congress at the Hallenstadion in Zurich, with the election of the president expected on Friday afternoon.