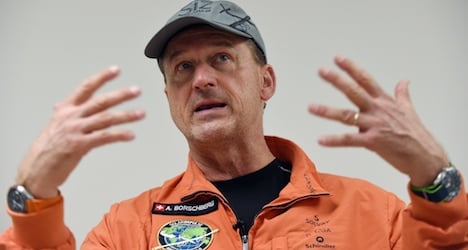 The spindly, four-engined aircraft, piloted by André Borschberg, spent a record 44 hours in the air and covered a distance of 2,852 kilometres after setting off from Nanjing in China, bound for Hawaii, 8,500 kilometres away.

Solar Impulse said its weather team observed the development of a cold front en route to Hawaii which would have been too difficult to cross.

The plane, powered by solar panels, maintained a holding position above the Sea of Japan before experts at the project's mission control centre in Monaco decided to divert Borschberg, 62, toward Nagoya-Komaki Airport.

Pilot André Borschberg told reporters in Nagoya that the unplanned diversion was no problem for the mission.

“I would say it has no impact,” Borschberg said, shortly after climbing out of the cramped cockpit.

“Practically I think it gives us the possibility to be in Japan, which is great,” he said.

“I lived here 30 years ago so it is a great pleasure to be back,” said the co-founder and CEO of Solar Impulse.

“We learned a lot during last night after 40 hours non stop, and demonstrated that the airplane is really doing great.”

A live stream from Monaco showed flight controllers erupting in cheers and applause as the plane touched the tarmac in central Japan.

The Solar Impulse team said it will now wait for optimal weather conditions before continuing its flight via Hawaii.

“I know the decision to divert to Nagoya has not been easy to take . . . because the technical aspect of the flight was going so well,” Borschberg,  said in a release issued by the team.

“This landing has been made possible by the extraordinary support of all the Japanese authorities, for which Solar Impulse is thankful.”

Bertrand Piccard, Solar Impulse chairman and the plane's other pilot, said the team was “a bit disappointed” over the forced landing.

But he added that they were “elated that our solar plane made such a great demonstration of the potential of clean energies by flying two days and two nights without fuel.”

In a bid to promote clean technologies, Solar Impulse began to circumnavigate the globe in Abu Dhabi in March on a trip that was originally intended to be for 12 legs, with a total flight time of around 25 days.

After concluding the plane's seventh leg, Borschberg was met by a skeleton support crew.