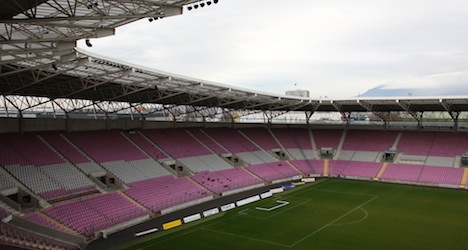 Servette FC is the main tenant of the Stade de Genève. Photo: AFP

The SFL’s appeals body announced its decision on Monday for financial reasons saying the club was “obviously over-indebted”.

The league issued a statement saying that Servette FC was unable to show that it could obtain sufficient revenues to cover its budget for the 2015-16 season.

The club can appeal the decision to a sports arbitration tribunal, although it is not clear whether it will have the resources to do so.

The SFL’s decision means Servette FC, a team with an illustrious history going back to 1890 that has won 17 league championships and seven Swiss Cups, will be relegated to the third division Promotion League.

“We are going to battle to avoid bankruptcy,” Hugh Quennec, Servette’s president, is quoted as saying by 20 Minutes newspaper.

“But this decision of the league to not give us a licence is a severe blow,” Quennec said.

The club has reportedly not paid its players and staff since April.

Montreal-born Quennec, who is also president of the Genève-Servette Hockey Club, headed a consortium that acquired the football team in 2012 for the symbolic sum of one franc.

The club first went bankrupt in 2005, when it ran up debts of over 10 million francs.

At that time the Servette Under 21s took over the team name and played in the Promotion League.

By 2011, the team was promoted to the first division Super League but it ran into financial difficulties again, filing for bankruptcy until Quennec’s group took over.

In May 2013, Servette were relegated to the Challenge League.

The team play in the Stade de Genève, the third biggest football stadium in Switzerland with seating for more than 30,000 spectators.

But Quennec has maintained costs associated with the stadium are at the roots of the team’s financial difficulties.

The canton of Geneva has so far declined to bail out the club.