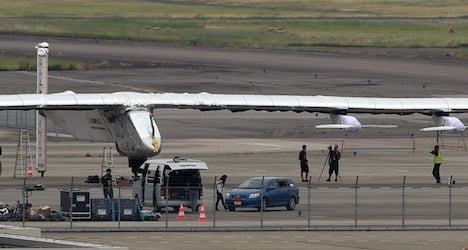 Crew members had spent the day holding onto the high-tech flying machine to prevent it being picked up by the wind as it sat on the tarmac in the central city of Nagoya.

Managers of the team trying to circumnavigate the globe by solar power said they were expecting a mobile hangar to be erected overnight, protecting the plane's delicate technology and 72-metre wings from the elements.

“Our team of a dozen people has been holding the plane on the ground” since it arrived late Monday night, mission initiator Bertrand Piccard told AFP.

“The plane has a huge surface area and is very light, with a take off speed of just 45 kilometres an hour, so with gusts of wind like today you really need to hold on to it.”

Piccard said the end was in sight for crew members who had spent hours clinging to the aircraft.

“The hangar is on its way and should be inflated during the night, so the plane should be protected tomorrow. When that's done we'll all be able to breathe a bit more easily.”

Japan was not originally part of the round-the-world itinerary for the Solar Impulse team, who had been hoping to get all the way to Hawaii from Nanjing in China.

The seventh leg of their epic mission, aimed at raising awareness of the possibilities of green energy, was intended to be 8,500 kilometres and to take six days and six nights of non-stop flight, with rechargeable batteries taking the strain during the hours of darkness.

But a developing cold weather front in the Pacific forced mission controllers to order pilot Andre Borschberg to divert to Nagoya.

Now, with the support team arriving from China, all eyes were on the skies and when they would get their next chance to attempt the vast distance across the Pacific to Hawaii.

“We want to carry on as soon as possible, and leave Nagoya before the rainy season,” said Piccard.

“But we need a clear meteorological window. The plane can only fly in nice weather, except when it flies at high altitude, above the clouds.”

Curious locals gathered in a park near the airport Tuesday, hoping to get a glimpse of the plane, which has 17,000 solar cells and weighs just 2,300 kilograms.

LEDs that festoon the huge wingspan gave the plane an ethereal look as it glided in to land on Monday night — even sparking rumours of an extra-terrestrial invasion.

“People were tweeting that a UFO was coming,” Shigeru Akoshima, 56, told AFP, while 67-year-old Mieko Murayama said she had been baffled by the lights.

“My husband even called the police,” she said.

The landing was live streamed on the project's website, with viewers treated to scenes of jubilation and relief from the Monaco mission control room as the plane touched down.

Despite having been cut short by several days, the flight from China notched up at least one first — Solar Impulse 2 managed to fly day and night powered only by sunshine for the first time.

The round-the-world attempt began in Abu Dhabi in March and was originally intended to be completed in 12 legs, with a total flight time of around 25 days.

It was not supposed to include a stop in Japan, but, as the last bit of land before the vast stretch of the open Pacific, it had always been a possible backup destination.

The mission's well-oiled PR operation wasted no time after the unexpected landing, posting messages on their Twitter feed in Japanese thanking the nation for its support.