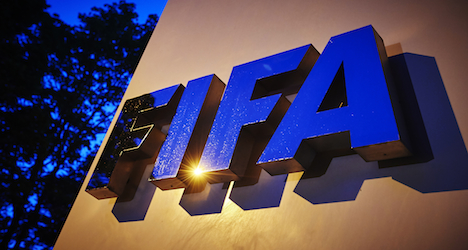 About 400 staff at the FIFA headquarters applauded the 79-year-old Swiss official the day after Blatter announced he would step down.

“There was a long ovation lasting several minutes and Mr Blatter was very emotional,” a Fifa spokesman told AFP.

Blatter's close associate, the combative secretary general Jérôme Valcke told French radio he feels no guilt over a $10 million (8.9 million euros) transfer to a disgraced official being investigated by US authorities.

He said he would not immediately follow Blatter's example and resign.

The Fifa president's departure stunned the football world, but the Federal Bureau of Investigation (FBI) is now looking into Blatter's role in tens of millions of dollars of bribes given to football officials, according to US media.

Critics of the 79-year-old Swiss official rejoiced at his thunderbolt announcement on Tuesday that he would stand down as soon as an election can be held to find a successor. No vote is expected before December.

His decision sparked a global race to take over as head of the world's richest and most powerful sporting federation.

Most eyes remain on Michel Platini, the Uefa president who failed in his bid as kingmaker last week, who has not hinted at his plans.

Blatter, who has ruled Fifa for 17 years, won a fifth term in an election on Friday.

But renewed criticism of his reign and new corruption revelations about Fifa forced him into a corner.

Blatter vowed that in his remaining months in office he would “focus on driving far-reaching, fundamental reforms that transcend our previous efforts.”

A Fifa spokesman said Blatter gave a similar speech to staff on Wednesday when he was applauded.

US authorities have charged 14 football officials and sports company executives over more than $150 million in bribes.

The New York Times, which broke news of seven arrests before the FIFA congress last week, quoted law enforcement officials and other sources to back their report that the Fifa chief is now in the firing line.

“Now that people are going to want to save themselves, there's probably a race to see who will flip on (Blatter) first,” one source told ABC News.

US Attorney General Loretta Lynch refused Wednesday, while on a trip to Latvia, to comment on the reports.

However, it emerged also on Wednesday that the Swiss authorities were yet to receive extradition requests from their American counterparts.

“We have not yet received formal extradition demands; we will release a statement when it happens,” said justice ministry spokesman Folco Gallia.

Acting on a US request, Interpol on Wednesday put disgraced FIFA former executive members Jack Warner and Nicolas Leoz on their most wanted list and issued an international alert.

Four heads of sports marketing companies have also been put on the list.

Warner, a former Fifa vice president, is in Trinidad and Tobago. Leoz, an executive member, is in poor health and reportedly under house arrest in his native Paraguay.

Warner is at the centre of the corruption storm, with US authorities focusing particularly on a $10 million transfer between South African
authorities and Warner, which was made through Fifa.

Reports say US investigators believe Valcke authorized the transfer and the money was intended as a bribe.

Fifa says it acted only as an intermediary for South Africa.

“I have nothing to blame myself for and I certainly do not feel guilty so I do not even have to justify my innocence,” the French official told the France Info radio station in an interview.

“I don't have the power to authorize a payment, especially one of $10 million, and above all one that comes from another account separate from Fifa,” added the 54-year-old, who has been secretary general since 2007.

In parallel to the US inquiry, Swiss prosecutors are looking into the award of the 2018 and 2022 World Cup tournaments to Russia and Qatar.

Qatar said that Blatter's resignation would have “no impact” on its World Cup preparations.

The Kremlin also said that Russia was “surprised” by the resignation but it was also going ahead with plans.