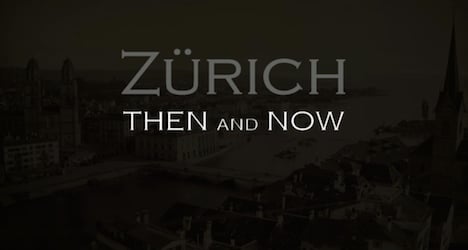 The 30-year-old Romanian expat has painstakingly taken photographs of buildings and monuments in the heart of Switzerland’s largest metropolis, matching them with views from yesteryear.

The pictures have been gathered on a video called Zürich Then and Now that Drimus has posted to YouTube.

Her documentation and the photos she has taken show that while areas outside Zurich are rapidly changing, the downtown is remarkably well preserved.

Views along the Limmat River, of the Paradeplatz and of the celebrated Bahnfofstrasse have barely changed since the late 1800s.

Based in Zurich for the past five years, Drimus is working for an energy trading company after studying quantitative finance at the Federal Institute for Technology in Zurich (ETH) and the University of Zurich.

“I didn’t intend to prove anything with this project,” she told The Local.

Like similar video projects she has done for other cities, including New York, she said she “only intended to present a well documented side-by-side comparison of interesting old pictures and their corresponding ones today.”

“I started working on this project in February by first collecting all the old photos from different sources and identifying their location,” Drimus said.

“I shot the new pictures during the weekends, over the period March 13th to May 25th.”

Drimus said one of the most challenging aspects of taking the photos was the weather.

“Almost all of the new shots had to be taken two or three times,” she said.

Drimus also researched information about the locations, which accompany the before-and-after pictures.

For example, she notes with the photos of the University of Zurich that it was the first university in Europe to accept women.

“I enjoy taking pictures and the idea of trying to find the exact spot and angle of a shot taken 100-150 years ago fascinates me,” she said.

“My favourite shots are always those which show people or vehicles, as they are the best at capturing the lifestyle back then.”

Take a look for yourself:

ZURICH
IN NUMBERS: How Zurich’s foreign population has more than doubled