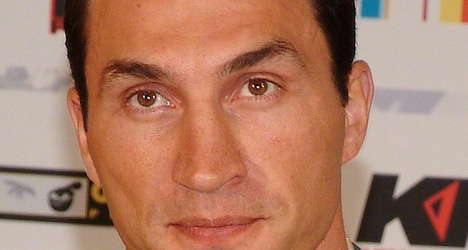 Ukrainian boxer Wladimir Klitschko, 39, appeared at a press conference at the university in northeastern Switzerland on Thursday to outline his involvement in a new post-graduate programme.

“Through my years of experience in competitive sports, I have developed a way that I have successfully used in my personal and professional life that I have transferred and am applying here,” Klitschko said in a German-language statement.

“This I will now pass on and am glad that I have the University of St.Gallen, one of the best universities in general, at my side.”

Klitschko, who in April successfully defended his boxing title against American champion Bryant Jennings, transcends the stereotypes often applied to boxers, with a successful career as an entrepreneur and extensive academic training.

Born in Kazakhstan in the former Soviet Union, his father was a general who became a military attaché of Ukraine in Germany.

He earned a doctorate in sports science at Kiev University, in addition to following in the footsteps of his elder brother, also a heavyweight boxer, who is now mayor of Kiev.

His company Klitschko Management Group, based in Hamburg, has teamed up with the the University of Saint Gallen’s Centre for Customer Insight (FCI-HSG) to offer the continuing education programme.

The change and challenge management program is geared to help executives and senior managers meet “personal and professional challenges in an increasingly complex and faster world”, according to a press release from the university.

Klitschko, nicknamed Dr. Steelhammer, told the press conference that lessons learned in sport could be applied to the business world.

A manager needs such skills as “endurance, flexibility, coordination and concentration”, he told the press conference, the St. Galler Tagblatt newspaper reported.

Klitschko is expected to deliver at least one lecture in the program.

He appeared to impress Swiss media at the press conference, who noted his fluent German (he also speaks English and Russian).

“In a digital world, the future is continually less predictable,” Wolfgang Jenewein, academic director of the change and challenge management programme at the university, said in a statement.

“Dr. Wladimir Klitschko is known for mastering for decades now for mastering new challenges in contemporary and innovative ways.”