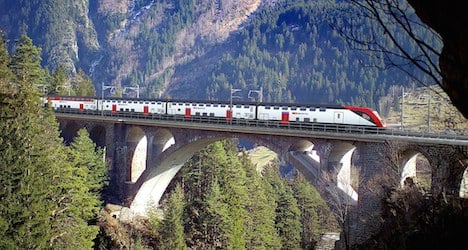 The Twindexx train, on display for the media at Bombardier’s Villeneuve plant in the canton of Vaud, is set to go into service at the end of next year, two years later than originally scheduled because of a dispute with the contractor that SBB said is now settled.

The rail operator said the first two trains of 62 ordered were put through their paces on a test track in Velim in the Czech Republic and were examined in Bombardier’s workshop in Hennigsdorf in Germany.

They fulfilled all the requirements of the order, the biggest in SBB’s history, which will see 59 trains delivered between now and the end of 2019, it said.

Three additional trains will be added in early 2020 under the revised deal with Bombardier, which was agreed in November 2014.

Thirty of the biggest trains will be 200 metres long, with seating for 696 passengers, Le Temps newspaper reported.

Another 23 trains of the same length will include a restaurant, reducing passenger capacity to 621 seats, the daily said.

The new models will replace Inter-City 2000 trains with a capability of travelling at 210 kilometres an hour and boosting capacity be ten percent.

They will ply major cross-country routes linking Geneva and Saint Gallen, and Zurich with Biel, Lucerne and Chur, as well as between Bern and Lucerne.

Test runs will be conducted on the Swiss rail network in the upcoming months, SBB said.

Bombardier, which employs 380 people in Villeneuve, at the eastern end of Lake Geneva, has just invested 20 million francs for a new hall on its site, as well as improved access to the SBB network.

SBB, for its part will have to train 1,500 drivers and 2,000 conductors while testing seven trains in parallel on its network, Hans-Ulrich Wyss, project chief is quoted as saying by the ATS news agency.