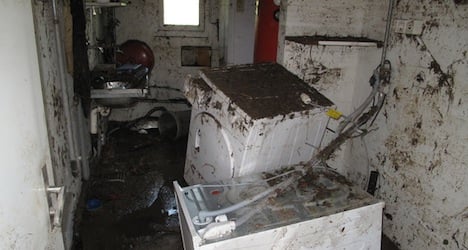 A 49-year-old man was electrocuted while trying pump water out of the laundry room of an apartment building in Schlieren in the canton of Zurich, police said on Tuesday.

The incident occurred on Monday afternoon as the man tried to empty the room of water following flooding caused by heavy rainfall.

The case is being investigated by police, the local prosecutor’s office and a federal inspector of electric installations.

The incident came a day after a 32-year-old woman and her five-year-old daughter drowned in the basement of their Dierikon home in the canton of Lucerne after it became flooded following torrential rain on Sunday night.

“But we could not intervene because it was too dangerous for our people,” Marfurt said.

The flash flood, resulting from the Götzentalbach stream overflowing its banks, carried wood, stone and asphalt slabs through the village’s streets, he said.

“It took hours before we could advance — this is something I have not experienced in 13 years of service,” the fire chief told Blick newspaper.

But some residents said the tragedy could have been averted if anticipated work to prevent the Götzentalbach from overflowing had been done, the paper said.

The stream has spilled over its banks five times in recent years.