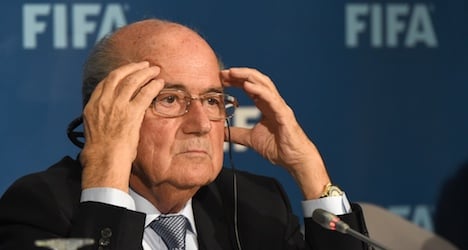 In the wake of a massive corruption scandal, Swiss citizen Blatter, 79, tendered his resignation on June 2nd but it will not take effect until December at the earliest.

In the draft before the parliament in Strasbourg, France, legislators welcomed Blatter's resignation that came just four days after he was re-elected as head of Fifa for a fifth term.

The draft “expresses serious concern, however, that the credibility of Fifa, as world football's governing body, and the urgent reforms required, cannot begin in earnest until a new leadership is appointed,” it said.

Since that might not happen for another nine months under Fifa rules, the draft “therefore calls on Fifa to select, in a transparent and inclusive way, an appropriate interim leader to replace Joseph Blatter forthwith,” it added.

The draft resolution — which is not legally binding but would amount to political pressure — was expected to be voted on Thursday afternoon in the plenary session of parliament after it was proposed by the body's seven main political groups.

Football's governing body was plunged into a crisis at the end of May when 14 current or former Fifa officials and sports marketing executives were charged, including seven in Zurich, as part of a US investigation into alleged corruption.

The fallout led to Blatter's resignation, but his replacement will not be known until December at the earliest, leaving the organization in limbo in the meantime.