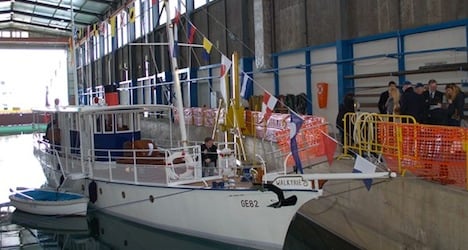 The 19-metre Walkyrie was originally built in a Liverpool shipyard in1882 before being disassembled and transported to Geneva where it was put back together.

The 28-tonne boat is now owned by Geneva private banker Charles Pictet, who acquired it in 2014.

CGN operates belle époque passenger boats on Lake Geneva, which are overhauled in Ouchy on an ongoing basis.

A few weeks ago it completed 12 months of renovations and delivered the Walkyrie to its owner.

Pictet is the fifth owner of the Walkyrie, with its gleaming wood-panel interior, brass fittings, covered deck and striking silhouette.

Eiffel, famous for building Paris’s landmark tower, owned the boat when he had a home in Vevey, the lakeside town in the canton of Vaud, the Tribune de Genève said.

Inside the cabin. Photo: CGN

The newspaper said the boat was completely restored with help from CGN’s trained staff and the guidance of a naval architect from Saint Nazaire in France.

“The workers were fighting among themselves to take care of certain pieces of precious wood because it is rare that they have the opportunity to work with such materials,” Pictet told the Tribune de Genéve.

Originally powered by steam, its engine was replaced in 1925 by a diesel version, according to CGN.

But this has been changed again for a new motor with modern electronic navigation equipment that allows a single person to sail the vessel, the Tribune de Genève said.

The boat still has a funnel and and voice pipe for relaying orders from the control deck to the engine room, both of which are now purely decorative, the newspaper said.

More information is available about the vessel and its restoration in the following YouTube video: