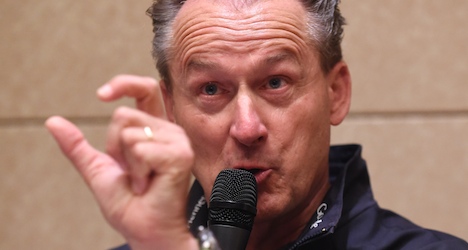 André Borschberg, who piloted the record-breaking Solar Impulse 2 from Nanjing, China to the central Japanese city of Nagoya, said if the plane's round-the-world trip was not finished in the summer, it would have to wait until next year.

“Of course we are ready to wait . . . (until) the time is fixed…for a right window, but obviously there is a limit,” Borschberg told reporters, asked about the maximum time the plane can stay in Japan.

“I hope that over the next days, maybe the next two weeks that we'll find the window to fly to Hawaii… but of course we plan to fly in summer,” adding that his team have “maybe two months”.

“In the worst case if we could not find a weather window, (we may) have to wait (until) next spring,” he said.

Solar Impulse set off from Abu Dhabi earlier this year in a multi-leg attempt to get all the way around the world using only the power of the sun.

However, the ambitious journey from China to Hawaii had to be cut short when meteorologists warned of a developing cold front over the vast Pacific Ocean.

Following their impromptu stop in Japan more than two weeks ago, the team has been scouring weather charts for the next opportunity for the five-or-six day flight to the Pacific island state.

“The weather forecast is good” for two days but it “starts to be unreliable after five or six days,” he said.

“So that's what makes the flight very difficult . . . we don't want to take too many risks for this specific flight.”

The trip to Hawaii will be the eighth and most daunting leg of the circumnavigation.

If successful, it will smash the 44-hour continuous flight record that the plane set from Nanjing to Nagoya.