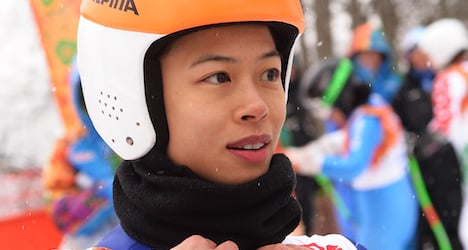 The sports tribunal found there was “insufficient evidence” to back the International Ski Federation (FIS) sanction.

But it backed the FIS decision to rule as invalid Mae's results at the Sochi Winter Olympics last year because of the “defective” results of her qualifying events.

Mae, competing under her family name of Vanessa Vanakorn, came 67th and last in the women's giant slalom at the Olympics.

The 36-year-old music star, who has sold millions of albums, became Thailand's first ever female Olympic skier when she competed in Russia.

But Mae, born in Singapore to Thai and Chinese parents, was handed the ban by FIS in November after the body had established that her qualifying event, held in a blizzard in January in Slovenia, in southeastern Europe, was riddled with irregularities.

The FIS said that the “manipulated” races on January 18th-19th resulted in points calculations “that do not reflect the true performance of the competitors that participated . . . and in particular the points awarded to Vanessa Vanakorn”.

Two giant slalom races in the Krvavec resort on January 19th were recorded as involving a competitor who was not present, while someone else who fell over was placed second after having ten seconds taken off her time, the FIS said.

In Friday's ruling, the CAS Panel “accepted the position of the FIS that a number of irregularities had occurred in the organization and management of the four races in question, but could not find, to its comfortable satisfaction, evidence of any manipulation by Vanessa Vanakorn herself that justified the guilty finding and the imposition of a four-year ban”.

“The CAS Panel held that the competitions in Krvavec, notwithstanding the fact that Ms Vanakorn herself was not guilty of any manipulation, were so defective that their results and qualification points gained therefrom could not stand.”

The CAS panel added that FIS had been right to annul the competition results meaning that “Vanessa Vanakorn remains ineligible to compete in the Sochi 2014 Olympic Winter Games”.

The violinist had practised extensively at the Swiss resort of Zermatt to prepare for the 2014 Games.