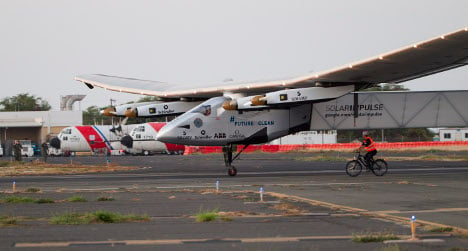 “Irreversible damage to certain parts of the batteries will require repairs which will take several months,” it said in a statement.

The team said last week that battery temperatures in the innovative craft had surged during a gruelling, five-day journey from Japan to Hawaii, and there was no way to cool the battery packs once the aircraft was in flight.

There had been hope that repairs could be completed by next month, but the statement said fixes will take until “early spring 2016.”

A spokeswoman for the project separately told AFP that it was possible the battery packs needed to be replaced entirely if the existing system could not be repaired.

The aircraft has been flown by Swiss national Andre Borschberg who has already set a new record for the longest solo plane flight.

The Solar Impulse 2 team said that the battery overheating during the long flight across the Pacific Ocean was not caused by “a technical failure” or “a weakness in the technology.”

Instead, the problem was a failure to fully anticipate the quick rate at which battery temperatures can rise in tropical climates, the statement further said.

Its wingspan is longer than a jumbo jet but its weight is roughly the same as a car thanks to its light construction.