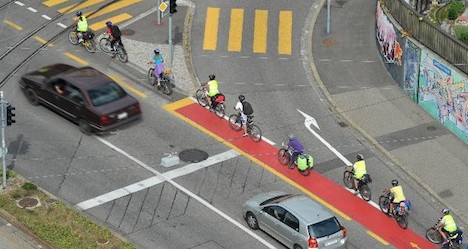 A report issued by the Federal Statistical Office (FSO) reveals 276 deaths last year across all forms of transport.

Of this number 243 deaths resulted from road accidents. A further 21,500 people were injured.

The number of fatalities was down 10 per cent on the 2013 level, continuing the downwards trend in recent years.

The last time fewer people were killed on Swiss roads was in 1945.

The worst year for road accidents was 1971 when 1,770 people died in almost 30,000 accidents – although there was a lot less traffic then than now.

The FSO said technical improvements in vehicles were the main reason for the drop.

But other road users can draw less comfort from the figures, which show cyclists 9.5 times more likely to die in a road accident than car drivers.

For motorcyclists the risk is 20 times greater.

Only in the air is the danger to passengers lower than on the roads. Last year just two people died in air accidents and ten people were injured – a record low level.

On the railways there were 28 deaths and 79 injuries. Suicides are not included in the figures.