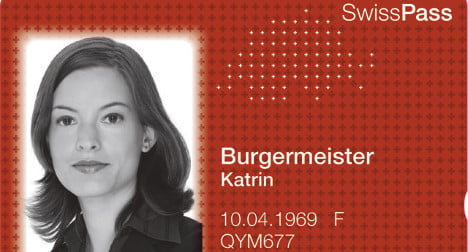 SwissPass is a new chipped photocard which will replace the current half-fare and GA (AG) rail cards from Saturday on.

While little information is visible on the card itself, details of the user’s travelcard subscriptions will be held in a central database and renewed automatically when they run out.

From 2016 the new smartcard will also allow users to sign up to car-sharing scheme Mobility, hire bikes from Publibike, buy local transport subscriptions and even load ski passes on to the card.

Card-holders will be able to manage their subscriptions online, without the need to visit an SBB ticket desk.

SBB has invested 62 million francs ($64 million) in the system, which a spokesperson told news agency ATS was supported by the 240 member companies of the public transport union.

But some critics say the introduction of the digital pass could lead to job cuts.

“Employees must already encourage customers to use the internet. That’s one of their salary-linked objectives,” Valerie Solano, secretary of the union of transport staff (SEV), told ATS.

But Donatella Del Vecchio, spokesperson for Swiss Federal Railways (SBB), responded by saying the introduction of SwissPass and the reduction in sale of over-the-counter tickets are two separate issues.

Tickets bought in person – which currently make up 25 percent of total sales – have been in decline since the introduction of electronic tickets in 2004, she told ATS.

According to SBB, 13 percent of tickets are bought online and 58 percent at automatic ticket machines.

The company predicts that those figures will change to 21 percent and 56 percent respectively by 2020, while the number bought in person will decrease to 20 percent.

From 2020, the SBB plans to reduce the number of ticket offices in “marginal zones,” while strengthening counter services in larger cities.

“We have noticed that travellers are increasingly visiting ticket offices in larger stations, since that’s where they change trains,” said Del Vecchio.

In an interview with newspaper Le Temps, Caroline Beglinger, co-director of the Association of Transport and the Environment (ATE) said SwissPass was the first step in the complete digitalization of rail ticket sales.

“ATE thinks that we must swiftly go in that direction and replace traditional tickets with a chipped card.”

“Switzerland is lagging behind in that respect. But I understand that we have chosen to go step by step. SwissPass doesn’t do everything but it’s a good way of getting customers used to digitalization.

“In 20 years I think we will have an electronic ticket system without cards, managed entirely by things like smartphones, which will cost a lot less than current systems.”