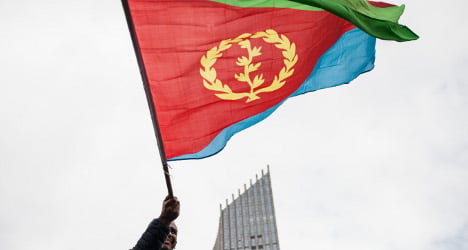 A man waves the Eritrean flag in support of a UN report on human rights violations. Photo: Nichole Sobecki/AFP

Eritrea’s economic difficulties and compulsory military service do not justify the granting of refugee status in Switzerland; instead, “the massive exile is encouraged by our too generous asylum policy,” the letter said.

In June, 122 out of 167 asylum applicants in the canton of Lucerne came from Eritrea, according to Le Temps.

President Sommaruga should “check if these nationals are really in danger when they return to their country. If the threat is confirmed, there could be grounds for provisional admission [to Switzerland],” Lucerne authorities said in the letter.

The letter continued: “We consider that the current practice of granting refugee status to people who are not physically threatened at the moment of their escape is wrong.”

The letter also drew attention to the number of unaccompanied minors from Eritrea.

“For us that’s proof that they are leaving their country for economic reasons, and not because of imminent threat.”

The letter outlines the difficulties in accommodating such children and demands more financial compensation from the Swiss federal government.

The latest statistics from the State Secretariat for Migration (SEM) showed that Switzerland received nearly 12,000 asylum applications between January and June this year, up 16 percent on the same period last year.

More than half were Eritreans arriving from southern Italy, joining more than 20,000 already in Switzerland – the largest such group outside the North African country.

Pius Betschart, deputy director of the Federal Office for Migration told the Schweiz am Sonntag newspaper that Eritrean applications tend to be successful.

“The vast majority of the Eritreans are in need of protection under Swiss law,” he said.

The human rights situation in Eritrea has long been on the agenda of the United Nations.

Forced evictions and the bulldozing of houses are an ongoing practice in the country, she said.

She also drew attention to the plight of unaccompanied minors crossing the Mediterranean who are “at risk of falling prey to many forms of abuse, including sexual, economic and criminal”.

Speaking to UK newspaper The Guardian last year Keetharuth said: “My work has highlighted the lack of rule of law, breaches of fundamental rights, with scores of reported cases of extrajudicial executions, enforced disappearances, arbitrary detention and torture in detention – all of which give reasons to Eritreans to flee.

“The protracted national service, under conditions that often turn it into forced labour and create a fertile ground for other violations, is another compelling one.”

In October last year Eritreans were given refuge at the famous Einsiedeln monastery in northern Switzerland after an influx of asylum seekers caused all other reception centres in the area to be full.