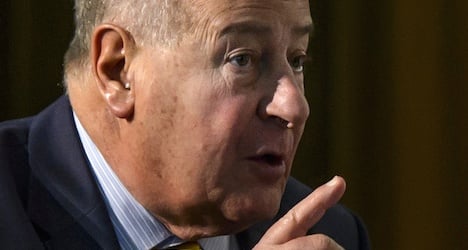 Carrard, 77, previously guided the Lausanne-based International Olympic Committee through its own governance reforms in the wake of the bribery scandal-hit Winter Olympics of 2002.

Fifa is currently reeling from its own corruption turmoil after seven football officials were arrested in a raid on a Zurich hotel on the eve of its congress in the Swiss city in May.

“It is vital for the future of global football to restore the integrity and reputation of its governing body,” said Carrard after being named on Tuesday.

“It's a very significant crisis, on a par with what I came across at the IOC between 1998 to 2000,” he told a tele-conference call.

“Once again we have accusations of corruption, structural reforms to put in place, interference from the political world and sponsors.

“There are similarities (with the Olympics), even if the situations are different and that the world has changed in the past 15 years.”

He said he had accepted Fifa's call to help as he considered it “important to find reforms which are acceptable to all to restore Fifa's credibility”.

“I've got this experience of already having sporting crises to manage,” he added.

Carrard, a lawyer who is a native of Lausanne, was appointed following consultation with the six football confederations and he will be assisted by representatives from two of each.

“As the independent chairman, I am committed to delivering the necessary package of credible reforms, working with representatives from within football and wider society.

“To that end, I will establish an independent advisory board, made up of representatives from outside football, to support the work of the committee and provide an additional layer of independent expertise.”

The Reform Committee will provide a preliminary update to the Fifa Executive Committee at its regular quarterly meeting on September 24th-25th, the football body said in a statement.

Fifa President Sepp Blatter, who is due to stand down in February next year when a new election will be held, said Carrard was the “right man” with a “proven track record”.

He added: “We are confident that he can help Fifa to strengthen its governance structures in a credible and meaningful way.”

The corruption scandal hit Blatter hard, with the Swiss chief, 79, subsequently vowing to step down despite winning a fifth term in May's elections in Zurich.

The vote came two days after the arrests of the seven Fifa officials, who are among 14 people facing charges in the United States over more than $150 million (137.87 million euros) of bribes for marketing and broadcasting
contracts.

The scandal led high-profile Fifa sponsors McDonald's, Coca-Cola and Visa to back calls for an independent reform commission.

Blatter said: “Fifa's commercial partners will also play a key role in the reforms, and we will be discussing with them the most productive way to include their views.”

Those commercial partners will also appoint two representatives to the commission.