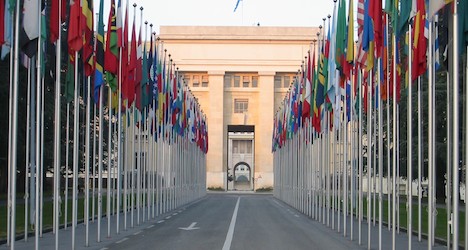 Hyde, a 22-year-old international relations graduate from New Zealand, made the surprise announcement at noon to media assembled at the Place Des Nations, a square in front of the United Nations Geneva headquarters.

“I'm announcing my resignation from the United Nations internship programme,” he told reporters.

Hyde said he decided to quit because it would be “too difficult to continue to focus on my work as an intern at this stage” and insisted that the UN had not asked him to leave or pressured him in any way.

The decision came after reports that he had found a place to live amid an outpouring of support over his plight, which has received international attention.

Hyde was camping by the side of Lake Geneva near the city’s botanical garden because he could not find a room or studio that he could afford.

After news of his predicament made headlines across the world, the international relations graduate received a deluge of supportive messages from individuals, some of them offering him housing and in one case the use of a bike.

But Hyde said he did not fully disclose his financial situation to the UN when he applied for the internship.

After graduating, he said when he began applying for jobs the only ones available were unpaid internships.

In previous applications when he was always asked if he could afford to “fully fund the internship” he said he answered with an “honest no” and was turned down.

With the UN internship “I said I had enough to support myself when really I didn't — and I got the job”.

But the conditions of the job — with no stipend or allowances for food, transport or health care — meant that living in a tent was the “only real possibility I could see”.

Hyde said he had to take responsibility for accepting the internship, although he added: “Call me young and call me idealistic but I don't think this is a fair system”.

He said he hoped attention could focus away from him and on the lot of interns in general.

Evoking the Declaration of Human Rights, which calls for all people to be paid for their work, Hyde said he hoped the UN would become a “role model for internships in the future”.

He earlier told the Tribune de Genève newspaper he was overwhelmed by messages of support he had received.

The newspaper, which reported that he had found accommodation, said various people were touched by Hyde’s situation and spontaneously offered to provide him a place to live, while politicians offered him support.

“In no way was my goal to arouse pity and to obtain lodgings,” he told the daily on Tuesday.

“I hope simply that my story can contribute to changing things for the situation of interns.”

Hyde’s mother, who lives in Christchurch, New Zealand, told website stuff.co.nz that the family was prepared to help her son but she doubted he would accept their help.

“The family was only partly surprised to read of his living situation,” Vicki Hyde said, given that her son had “a strong view on principles and how people should be treated”.

She said Hyde had spent a lot of time overseas recently, studying political science in Paris and working in Kenya and that sometimes he proved hard to contact.

The intern earlier said he was concerned that he would be unable to afford to continue the internship and gain a valuable certificate that could be used to gain future employment.

The Geneva Interns Association has campaigned for all UN interns to be paid.

This would avoid a situation where only those coming from wealthy families can afford to take internships by making them more inclusive, the group maintains.

Ahmad Fawzi, communications chief for the UN in Geneva, said the decision to pay interns remained in the hands of its 193 member states.

But Fawzi told the Tribune de Genéve that Hyde should have been able to find lodgings if he had looked properly.

“There exists solutions for interns and even lists of families prepared to welcome him.”