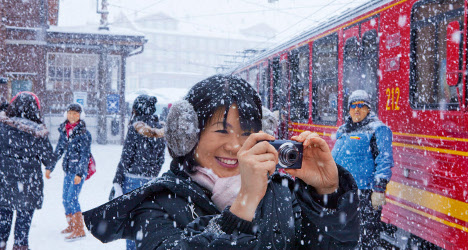 According to the report by newspaper Blick, above average numbers (more than 50,000 hotel nights per year) of Belgians spend their holidays in the Val d’Anniviers, the Dutch enjoy Sent in the canton of Graubünden, the English hang out in ski resort Verbier and Americans head to Lucerne.

The Swiss, however, holiday in above average numbers in very different areas including Lenk in the canton of Bern and Scuol in Graubünden.

Unsurprisingly, for a majority of visitors the appeal of Switzerland is its nature and mountains, said the report.

However the strong franc has had an impact on tourist numbers in Switzerland, with overnight visitors from the eurozone falling by an average of eight percent from 2014 to 2015.

Nine percent fewer Germans visited Switzerland in the first half of 2015 compared to the same period last year, a blow to Swiss Tourism as Germany is its biggest market.

However visitors from the Gulf states, Russia, Poland, Brazil, South-East Asia and India are on the rise.

In 2014 five times as many tourists from the Gulf states (United Arab Emirates, Qatar, Saudi Arabia, Kuwait, Oman, Bahrain)  visited Switzerland as in 1999.

Tourists spent 16 billion francs in Switzerland last year, it said, with most of it coming from the wallets of tourists from the Gulf countries, Japan and China.

Based on 2013 figures, the report said tourists from Gulf countries spent on average 430 francs per day in Switzerland.

The Dutch were the most frugal, forking out just 130 francs per day.

According to the report Zurich is the most popular tourist destination in Switzerland overall.