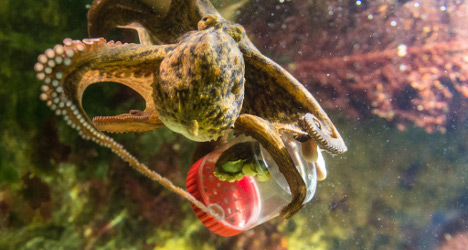 The common octopus arrived at the zoo in July and has “proven to be particularly eager to learn,” the zoo said in a statement.

“The vivarium staff all agree that they have never before cared for such an astute animal.”

“The octopus is extremely interested in its environment, observing visitors and welcoming animal keepers with eightfold hugs, and has quickly learned to open the various screw closures on its food packages.”

The news has led Swiss media to champion him as a possible successor to the world-famous ‘psychic’ octopus Paul who earned a reputation as an oracle after correctly predicting the outcome of several international football matches.

Keepers at his home at the Sea Life Centre in Oberhausen, Germany, tasked Paul with predicting the winner of Germany’s Euro 2008 games by asking him to choose between two food boxes marked with the competing teams’ national flags.

After correctly predicting the outcome of four out of six matches, he went on to guess the winner of all seven of Germany’s matches in the 2010 World Cup.

He also predicted Spain’s win against the Netherlands in the final.

However it remains to be seen if Basel’s one-year-old octopus will be around to rise to a similar challenge.

The common octopus has an average life expectancy of two years, meaning he may not be alive to test his powers during next June’s Euro 2016.

According to Basel zoo, octopuses are “some of the most intelligent creatures on the planet.”

“It is hard to imagine what they would be capable of if they lived for 30 years.”

There have been several other attempts to emulate Paul since he died in 2010.

During Euro 2012 Paul’s imitators included a pig, an elephant and a raccoon.