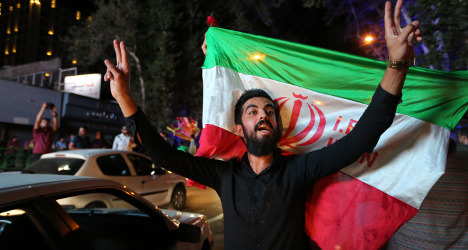 Celebrations in Iran after the historic deal in July. Photo: Atta Kenare/AFP

Citing the “important turning point in the 12-year nuclear dispute”, the Swiss government said it had decided to lift some sanctions against Iran that had already been suspended in January 2014.

It decided to lift the ban on precious metals transactions with Iranian state bodies, as well as the requirement to report all trade in Iranian petrochemical products.

It also lifted requirements to report the transport of Iranian crude oil and petroleum products, as well as insurance policies taken out in connection with such transactions.

Switzerland, which has been representing US interests in Iran since Washington and Tehran broke off diplomatic relations in 1979, said the steps should “be seen as a sign of its support for the implementation of the nuclear agreement and its interest in deepening bilateral relations with Iran.”

The agreement with Tehran, reached in Vienna by the UN Security Council's five permanent members — Britain, China, France, Russia and the United States — plus Germany, provides for a progressive and conditional lifting of crippling international sanctions, in exchange for guarantees that the Islamic republic will not develop a nuclear bomb.

Other countries have yet to lift sanctions against Iran, pending verification that the country is complying with the July 14th agreement.

The Swiss government also stressed that “the vast majority of international sanctions against Iran, including all of the sanctions adopted by the UN Security Council, will remain in force for the time being,” and said it would reimpose the lifted sanctions if Iran failed to follow through on the deal.