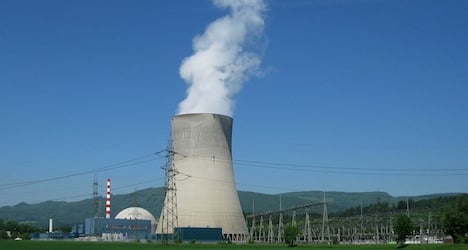 Gösgen nuclear plant in the canton of Aargau. Photo: Ch-info.ch

Utility company KGD announced on Sunday night that it was disconnecting the Gösgen nuclear plant in the canton of Solothurn from the grid to resolve a steam leak problem.

The utility said that to perform the needed repairs it had to turn off the plant to cool the the impacted area.

The leak occurred in a non-nuclear steam turbine facility.

The company said the leak had no impact on the environment.

After the repairs are completed and the relevant tests are conducted the plant will resume production, KGD said.

Gösgen is one of four nuclear power plants in Switzerland with the others already down for repairs and servicing, the SDA news agency reported.

The Beznau power plant in the canton of Aargau went offline on Friday for repairs of its second unit, while the first unit was shut down in March after irregularities were found in the reactor’s pressure vessel.

Beznau, producing energy since 1969, is the oldest operating nuclear plant in the world and environmentalists have been campaigning to shut it down.

The Swiss house of representatives, the lower house of parliament, has voted to shut the plant down by 2031.

The Leibstadt and Mühleberg nuclear plants in the cantons of Aargau and Bern respectively were already shut down for annual maintenance.

Nuclear power plants normally supply around 36 percent of Switzerland’s electricity but the country is able to rely on imported power.

In 2011, the federal government decided to phase out nuclear plants following safety concerns raised by the Fukishima accident in Japan.

A magnitude 9.0 earthquake and a tsunami damaged several nuclear reactors at the Japanese plant, leading to radioactive emissions and an evacuation of people living near the plant.

KGD officials announced on Tuesday (August 18th) that the plant had been reconnected to the grid in the early afternoon after testing.