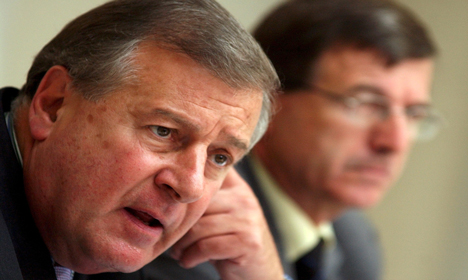 François Carrard was in charge of implementing reforms at the International Olympic Committee. Photo: TT

“There is something unfair in the way he is treated. I am saying this in a completely independent capacity,” Carrard said in an interview published Sunday in Le Matin Dimanche newspaper.

“He is being pilloried. He has indeed made mistakes, but he has also made positive contributions… this man is being unfairly treated.”

Carrard, 77, was appointed by Fifa on August 11 to lead the world football governing body's Reform Committee after the corruption scandal erupted in May, when seven football officials were arrested at a Zurich hotel on the eve of a Fifa Congress.

The seven Fifa officials were among 14 people facing charges in the United States over more than $150 million (137.87 million euros) of bribes for marketing and broadcasting contracts.

Blatter went on to win a fifth term in office, but under pressure he suddenly announced he would stand down next February when a new election for his post would be held.

Blatter denies any wrongdoing and Carrard appeared to back him, telling Le Matin that he had not seen a shred of evidence against his fellow Swiss.

“Since we are talking about corruption… I have the entire American case in my possession and it contains not one single word against him,” he said.

“As it stands, I am not aware of the slightest indication of corruption on Blatter's part.”

Carrard, who previously was in charge of implementing reforms at the International Olympic Committee in the wake of the bribery scandal-hit Winter Olympics of 2002, is due to present his reform proposals to a Fifa congress meeting on February 26, when Blatter will officially stand down.

The Reform Committee he heads, which will meet for the first time in Bern on September 2-3, comprises two officials from each of the six Fifa confederations. He will also consult with sponsors and other parties involved near the end of October.

“Fifa has taken some heavy blows, the organisation is in a deep crisis and I think that all its members are aware that some drastic measures need to be taken,” he said.

But he added that it would be “unrealistic” to expect that Fifa's problems can be fixed at the drop of a hat.