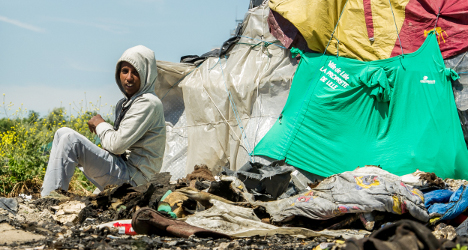 A refugee sits by his tent in Calais. Photo: Philippe Huguen/AFP

As Swiss aid organization Caritas Schweiz calls for the Swiss federal government to double the amount of aid pledged to the refugee crisis in Europe, private individuals in Switzerland are donating clothes, organizing collections and doing their part to help stricken migrants.

On Thursday 33-year-old Anila Hussain, originally from Pakistan, who lives with her family in Gland, in the canton of Vaud, decided with friend Navine Eldesouki to start collecting items to help refugees in Switzerland after seeing the heartbreaking image of three-year-old Aylan Kurdi, who died trying to reach Turkey.

“I just saw the news and the picture that’s highlighted all over the world about this little boy. I think that provoked a lot of people and personally me as well. Being a mother, it’s painful,” Hussain told The Local.

“Yesterday morning we decided to just stand up ourselves and do something rather than depending on the politicians to do something.”

Hussain and Eldesouki are collecting winter clothes for adults and children that will be delivered on Saturday to a refugee centre in Sion in the canton of Valais.

“We are just trying to do a little something for them, it’s nothing special,” she said.

“I’m not Syrian, I have no connection with Syria; it’s only as a human being I am doing that for another human being.”

Hussain says she has received so many donations already that they won’t send everything to Sion but may keep some back for a future delivery to Germany.

“We are only sending the things they need right now, not to overwhelm them too much.”

Meanwhile Rachel Wise, a New Zealander who has lived in Switzerland for 10 years, is gathering clothes and practical items to take to refugees in Calais.

“My husband and I are driving up to the UK next week with an empty van so I thought on our way we could drop off some much needed supplies in Calais,” she tells The Local.

“I have felt moved and completely helpless reading about events in Africa and the Middle East and the lengths ordinary people are going to to escape their desperate situation there,” she says.

“I want to help and I think dropping some supplies to those who have made it as far as Calais (to then just wait in these awful camps) is the least I could do.”

“I put a note up on my Facebook page yesterday afternoon, thinking a few friends might drop some things off. Since then I have been totally overwhelmed with the response I received,” she tells The Local.

“It goes to show the reach of social media, but more importantly, it's fantastic how many people want to help. It seems opinion has changed across Europe and more people think we could do more to help.”

Swiss aid organization Caritas Schweiz recognized the “private acts of solidarity with the migrants and those who generously support emergency aid and Swiss relief efforts”.

In a statement published earlier this week the organization called for the Swiss government to increase its aid budget to “at least 100 million francs” to help Syrian refugees across the Middle East and Europe.

The recent rise from 30 to 50 million francs a year is “far too modest given the size of this humanitarian catastrophe,” it said.

It added: “From right to left on the political spectrum, parties continue to stress that they think providing aid in the countries affected is correct and urgent. It is certainly time to translate these fine words into deeds.”

Switzerland expects to receive 30,000 asylum requests this year, which, though a significant increase on previous years, is far from the numbers experienced elsewhere in Europe, stressed Caritas.

“Contrary to what certain politicians are saying, we are not talking about asylum chaos.”

Nevertheless, asylum centres across the country are at capacity, causing some cantons to erect temporary tents to house some migrants.

As well as making financial donations to charities supporting refugees, Caritas advises a number of ways that Swiss residents can offer practical help.

Individuals can offer up their spare room to house migrants through programmes including the Swiss Organization for the Help of Refugees and the Wegeleben project.

People can also donate clothes to Caritas for distribution to refugees within Switzerland, or give money to support their work with refugees in the Middle East.

But the “most important” says Caritas, is that people engage within their community to make refugees feel welcome.