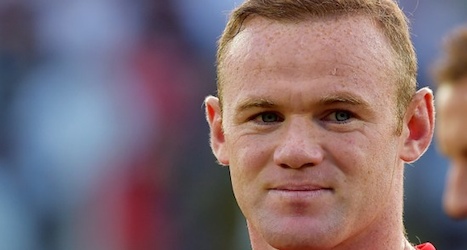 The England captain slammed a penalty into the top-left corner in the 84th minute at Wembley Stadium to put Roy Hodgson's side two goals up after Harry Kane had opened the scoring in the Euro 2016 qualifier.

Rooney's goal took the 29-year-old Manchester United striker past Charlton's mark, which had stood since May 1970, and made him the first England player to score a half-century of goals.

It came on his 107th appearance for his country, which is one more than Charlton achieved during a storied international career that took in England's triumph on home soil at the 1966 World Cup.

Rooney pointed to the sky in celebration and appeared to wipe away tears after being granted a standing ovation by the majority of the 75,751 fans in attendance.

Asked if the magnitude of the moment had overwhelmed him, Rooney said: “I was bit emotional, it's a huge honour and one I am extremely proud of.

“It's a great feeling. I've been close for the last few games and it's a dream come true.”

Despite being so desperate to break the record, Rooney said he was able to keep his nerves in check as he dispatched his ice-cool penalty.

“I knew it was a big moment and just picked my corner and put my foot through it,” he added.

“To be the record scorer before the age of 30 is nothing I could have imagined.”

Charlton was quick to salute Rooney's achievement, although he admitted he was a little disappointed to lose the record.

“I would like to congratulate Wayne on becoming England's leading goalscorer. I have always been very proud to hold this record,” he said.

“I obviously cannot deny that I am disappointed that I now don't hold this record, however, I am absolutely delighted that it is Wayne, as captain of my beloved club and country, who now holds this record.

“On behalf of myself and everyone at Manchester United I would like to say congratulations Wayne, this is a very proud moment for you and your family.

“Congratulations Wayne Rooney on succeeding where all others have failed by becoming England's highest ever scorer,” tweeted Gary Lineker, who fell just short of the record himself with 48 England goals.

“When you look at how long the record has stood then he should be a very proud person,” former England striker Alan Shearer told BBC Sport.

“It's a fantastic achievement to have stayed at the top for so many years,”

Rooney had equalled Charlton's record, and moved a goal ahead of Lineker, by opening the scoring from the penalty spot in England's 6-0 win in San Marino on Saturday, which secured their place at Euro 2016.

The former Everton striker is also closing in on Charlton's United scoring record and requires 17 goals to surpass the former midfielder's tally of 249.