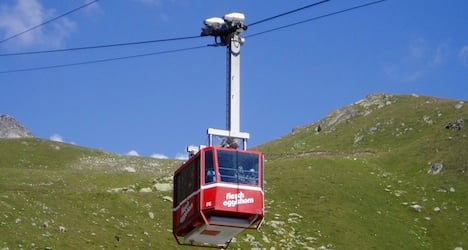 The incident occurred on Monday around 1.15om after the man took the aerial tramway from Fiesch to the Eggishorn terminus at 2,926 metres.

The victim then began hiking on a trail in the direction of the Kühboden Alpine lodge in the Aletsch glacier region when for an undetermined reason he fell, Valais cantonal police said.

Hikers on the trail below heard a cry and contacted emergency rescue officials, police said in a statement.

A helicopter team from Air Zermatt responded to the scene but could only note the man’s death, police said.

It's not clear whether the victim was a resident of Switzerland or a tourist visiting the country.

Elsewhere, in the canton of Vaud a criminal investigation is underway into the death of another senior citizen, a 74-year-old resident of Neuchâtel, who went missing at the weekend.

His abandoned motorboat was discovered on Saturday beached on the rocks in Neuchâtel with the motor still running.

The man’s body was found late the following day off the shores of Cudrefin, a municipality in the canton of Vaud.

This followed a massive search involving police from the cantons of Vaud and Neuchâtel, as well as search and rescue workers and two helicopters, including one from the Swiss Aur Force.

Lake Neuchâtel, the largest lake entirely in Switzerland, lies mostly in the canton of Neuchâtel but portions are also located in the cantons of Vaud, Fribourg and Bern.